Do Thundershirts Really Calm Dogs During Fireworks or What? 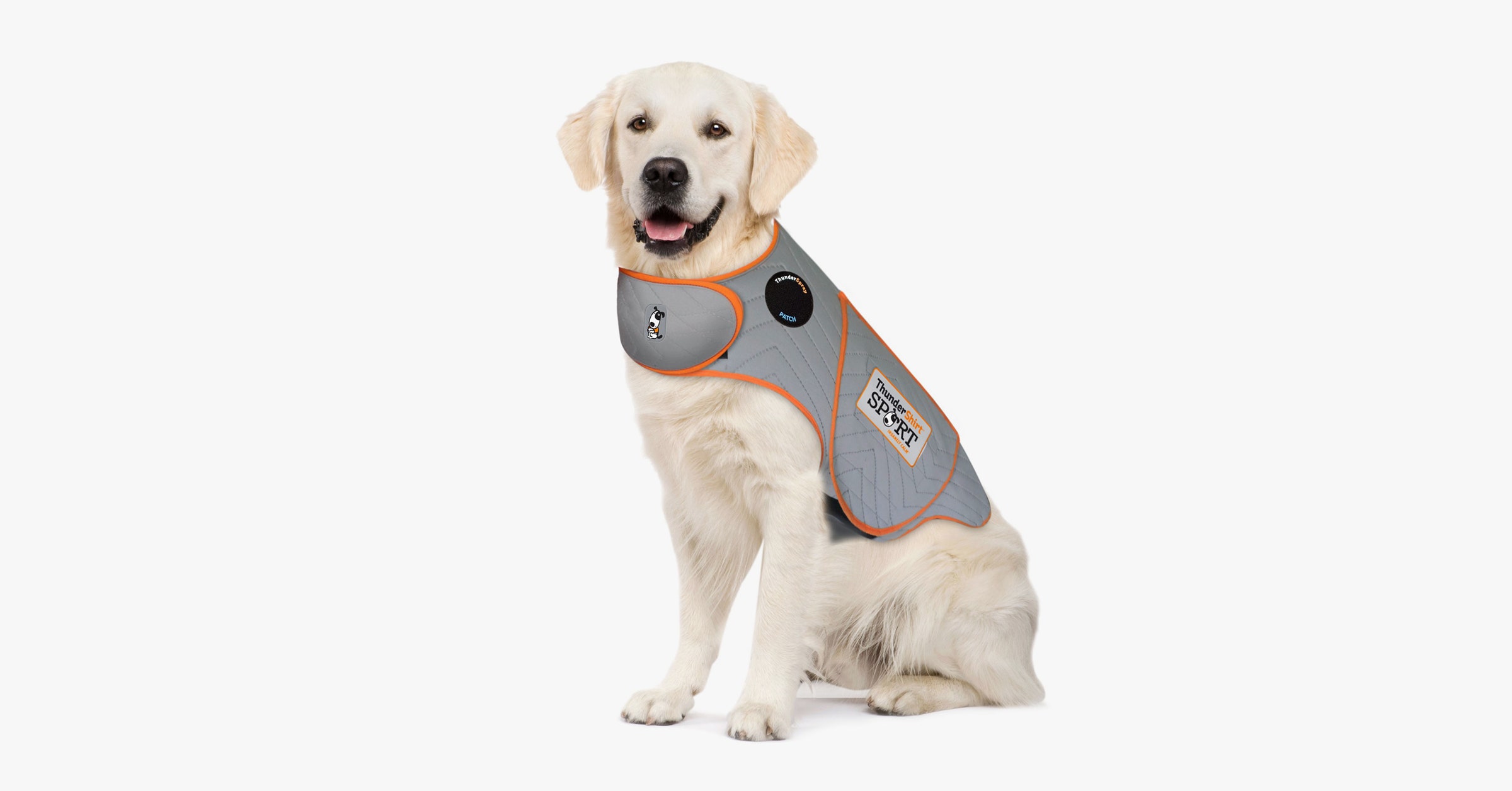 The dogs will lose their minds. They always do. Every Fourth of July in America, as children stay up past their bedtime to watch colors explode in the sky and adults sit on the back of pickup trucks drinking beer and marveling at a pyrotechnic technology 12 centuries old, pets across the country panic with every boom.

Sound phobias are very common for dogs‚ÄĒand cats‚ÄĒmaking this holiday a nightmare for millions of animals. ‚ÄúHalf of the dogs in my practice are dealing with fireworks fear this week,‚ÄĚ says veterinarian and animal clinical behavior resident Amy Learn, whose clinic in Richmond, Virginia, sees more than 2,000 clients annually. For many dogs, the nightmare has already begun. A quick search on Twitter shows people across the land complaining about neighbors popping fireworks off early. In Boston, where I live, they first started exploding in the middle of last week. The German shepherd next door has been pacing back and forth every night since, nails skittering across the floor.

That behavior is typical for dogs with loud noise phobia. Learn says you‚Äôll know if your animal has abnormal fear of loud sounds if they don‚Äôt recover from the initial shock of hearing the sound right away. If your dog is pacing, howling, panting, and trying to run as far away from the sound as possible; if your cat is hiding, its ears cocked back, its eyes dilated, they need help. Every year around this date, people flock to Google to search ‚ÄúHow to keep a dog calm during fireworks.‚ÄĚ One answer that frequently shows up at the top of the results: anxiety shirts or thunder vests.

These come in two main designs‚ÄĒa spandex T-shirt that‚Äôs meant to give an animal a balanced hug, and a vest with straps designed to put pressure on particular parts of the body. ‚ÄúTheir job is to squeeze,‚ÄĚ Learn says. ‚ÄúIt’s postulated that it feels like a hug.”

Animal anxiety shirts were directly inspired by research into humans with severe anxiety or autism. The insight that certain kinds of touch and pressure can have a calming effect was first popularized and championed by livestock behavior expert and autism-awareness-advocate Temple Grandin, who invented a ‚Äúhug machine‚ÄĚ for humans with autism after noticing the way a light squeeze calmed cows before slaughter. Grandin‚Äôs work is specifically called out on the website for Thundershirt, the major player in the animal anxiety wrap market. Deep Pressure Therapy is now widely used to help calm people with autism, and many different studies suggest the therapy shows real results.

But the science is less clear about whether pressure therapy really works for dogs.

Michelle Mullins, an animal behavior expert and board member of the International Association of Animal Behavior Consultants, first learned about animal anxiety shirts two decades ago. But they have only gone mainstream in the last 10 years with companies like Thundershirt. ‚ÄúAs we often are wont to do when we look at science, we want to say if it works for humans it will work for our pets. In some cases it’s true and in many cases it’s not,‚ÄĚ Mullins says. ‚ÄúUnfortunately we don‚Äôt have a huge amount of scientific studies about this.‚ÄĚ

There‚Äôs only been one study to date into the use of anxiety shirts to deal with sound phobias, and it had a small sample size of 18 participants. Published in the Journal of Veterinary Behavior in 2013, the study compared owner-reported anxiety levels before and after prolonged use of anxiety wraps, and found that 89 percent of dog owners felt the shirts helped. Most importantly, the study found that even for those animals who saw no benefit, there were no adverse side effects. But one study is hardly conclusive evidence, and along with small sample size the study is also hindered by relying on self-reporting, which is often highly unreliable.

That leaves pet owners and people who care for animals to depend on anecdotal experience. ‚ÄúThis is one of those things that isn’t super scientific,” says Learn. “A lot of it is subjective. It’s the owner saying, ‘Oh, my dog feels better.'” But owners apparently feel that way a lot.

‚ÄúI rarely if ever recommend them as a cure all,‚ÄĚ says Mullins, ‚Äúbut I have seen many dogs successfully use these as part of their therapy.‚ÄĚ

Both Learn and Mullins report working with animals that appear to be helped by these shirts. They always recommend owners use the shirts in combination with other interventions, like medication or specific behavioral modifications. A hallmark of Mullins’ long-term behavioral work with sound-phobic animals is to desensitize the animals by exposing them to loud sounds slowly over time. Clearly, for people searching Google for a solution in the days before the Fourth of July, it‚Äôs too late for that. For them, an anxiety shirt may be the easiest option this year. You can get them quickly, and put them on your animal immediately.

Learn often suggests that people spray ‚Äúdog-appeasing‚ÄĚ pheromones on the anxiety shirts, a treatment that has been more widely studied‚ÄĒthough its effectiveness is still up for debate. One study shows dog-appeasing pheromones can calm canine noise-associated anxiety, but two others were inconclusive. Learn reports that she has treated pets who have separation anxiety with only pheromones and found they worked well.

These results, of course, are also subjective. “It’s hard to say to a pet, ‘Are you calmer?'” says Learn. Neither anxiety shirts no pheromones is a “golden pill that solves all problems,” she adds.

But Mullins and Learn emphasize that here‚Äôs no harm in trying them. Neither has seen any adverse effects, unlike popular anti-anxiety medications‚ÄĒwhich can cause increased heart rate, lethargy, more stress, and vomiting. The worst that happens with thunder shirts is that animals find it annoying to be dressed. ‚ÄúThese are not a miracle pill that you put on and all your problems are solved,‚ÄĚ says Mullins. But if you know your dog is going to be scared during Fourth of July, one of these shirts or vests might help.

A few other things you can do to calm your dog down? First of all, says Mullins, be smart: Don‚Äôt bring your dog to the fireworks BBQ. If possible, remove them from anywhere the noise will be particularly loud. She suggests you turn on a fan or a white noise machine to help drown out the explosions. Give your animal something to distract them from the noise, like a kong toy filled with food. Give them a safe space like or a crate or a closet where they can hunker down.

And the good news is when it‚Äôs all over, and the sky has gone dark and the air smells of potassium nitrate, you have the experts’ blessing to go ahead and give your dog a real, actual, comforting hug.