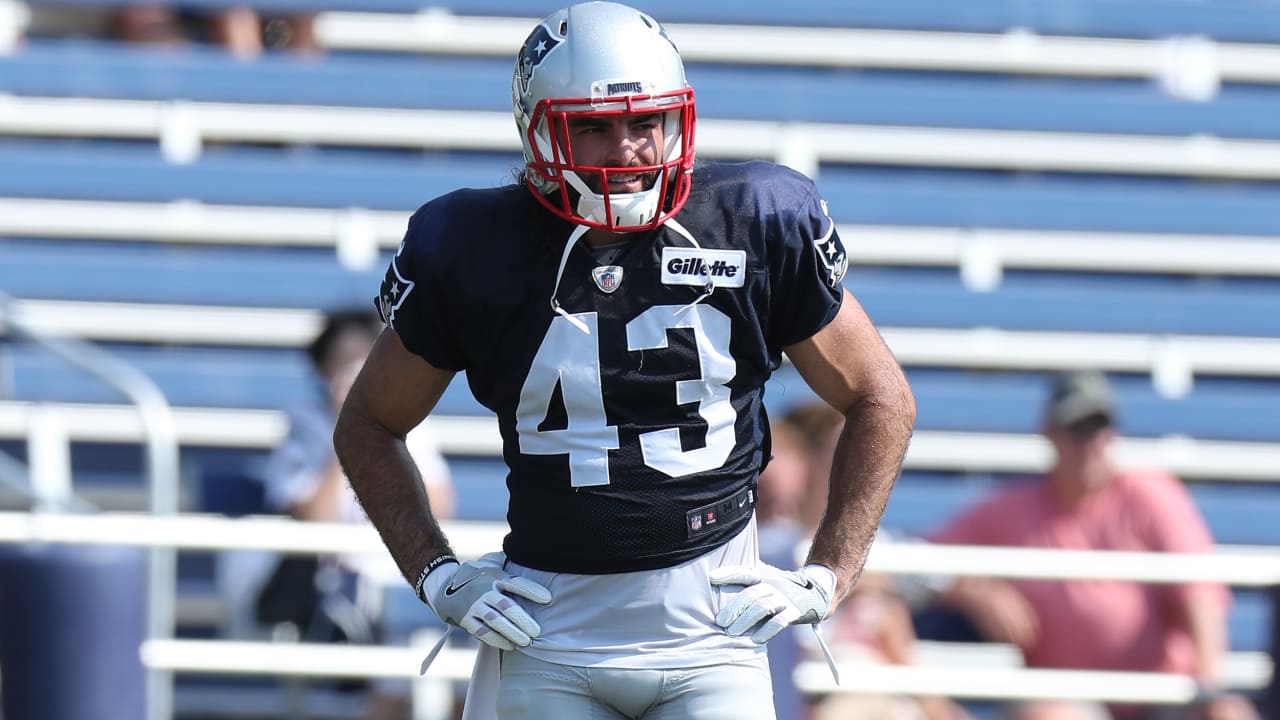 These might be the proverbial â€śdog days of summer,â€ť with temperatures and dew points skyrocketing throughout Southern New England of late. Tuesday at Patriots training camp, however, was all about the PUPs.

Coming off a rare two-day layoff from on-field work at camp, Bill Belichickâ€™s team got back to business Tuesday. Notably, all three remaining members of New Englandâ€™s physically unable to perform list (PUP) suited up and took part in a considerable amount of practice, though none was a full participant. Nevertheless, the appearance of Nate Ebner, Cyrus Jones, and Jonathan Jones was certainly a welcome sign. The trio is now off PUP as the Patriots continue to enjoy relatively good health overall on their 90-man roster.

Furthermore, neither Ebner nor the two Joneses wore a red, no-contact jersey, which allowed them to engage in various drills and other activities on the field.

Cyrus Jones spent a significant part of practice fielding punts from Ryan Allen and rookie Corey Bojorquez. Ball security has been an issue for Jones in the past, but on this day, he looked rather smooth and confident hauling in the high kicks from the two punters.

Ebner and Jonathan Jones soon joined him and the specialists on that otherwise empty field, which wasnâ€™t being used by the rest of the squad because they were involved in a team period on the field closest to the bleachers.

Ebner and J. Jones, who are mainstays on most of the kicking units, worked on their coverage and blocking technique for several minutes before they and C. Jones retreated to the lower practice field to resume conditioning exercises. Wide receiver Kenny Britt, who was also in full pads, joined them. Britt has been off the PUP for a few days, but has yet to do anything extensive beyond the warmup and position drills at the start of practice.

Ditto for defensive end Trey Flowers. Heâ€™s been dealing with something medical for the past few days and continued to work on rehab and conditioning, both on the lower field and later at the far end of the main set of fields where camp is held.

For more about Day 10â€™s practice attendance and participation, as well as other blog-worthy observations (or blogservations, as weâ€™ve termed them here on patriots.com), please keep reading.

— Just four Patriots were not spotted at all during Tuesdayâ€™s practice. Right tackle Marcus Cannon, rookie running back Sony Michel, and first-year offensive lineman Jason King continue to be held out of practices altogether as they deal with respective medical conditions. Michel is believed to have undergone a surgical procedure to drain fluid from one of his knees and, according to media reports, could be shelved for a month or so.

— Second-year linebacker Harvey Langi rounded out the absentee list today, though itâ€™s unclear for what reason. He took part in the Day 9 practice this past Saturday and didnâ€™t appear to have sustained an injury at that time.

— Intense heat and humidity took its toll on several players Tuesday. Just before practice, Belichick told reporters that the uncomfortable weather wouldnâ€™t impact how he would conduct practice. â€śJust work through it,â€ť he maintained. Yet, offensive lineman Brian Schwenke was so overcome that he had to be escorted back to the locker room midway through practice with a member of the teamâ€™s medical staff. Before he exited the field, the head coach, standing nearby, took a prolonged interest in Schwenkeâ€™s status.

— Rookie o-lineman Isaiah Wynn also experienced heat-related issues, yet managed to remain on the field and eventually recovered sufficiently to be inserted back in the o-line mix during later team periods.

— It wasnâ€™t just big men who were affected. Diminutive wide receiver/return specialists Riley McCarron looked like he was losing steam at one point after going hard in several reps prior. Thankfully, he, too, was able to push through the remainder of practice without further incident.

— During the first hour of practice, the defensive backs starting working together in a drill focused on tracking long balls downfield. With the sun rising in east, the bright light was directly in their faces. CB Eric Rowe was nearly hit on the top of the head when he lost the ball in the sun so badly that he had to put his hands up to shield his eyes. That prompted the defensive backfield coaches to flip the drill so that the players were facing west and could easily see the ball in the air.

— QB Tom Brady hasnâ€™t been overly active in recent practices, and that continued Tuesday. He yielded most of his team period reps to backups Brian Hoyer and rookie Danny Etling.

— This was a day for private conversations between teammates. Brady had a couple of conspicuous 1-on-1 chats with teammates during practice. While sitting out a team period rep, Brady took new wide receiver Eric Decker aside to discuss what looked like Bradyâ€™s preferred way to run a particular route. He demonstrated in slow-motion how heâ€™d like Decker to attack the route, and the veteran pass catcher seemed to hang on Bradyâ€™s every word.

— Later, while the rest of the team was on the right-hand field (nearest the bleachers) in another team period, Brady and TE Rob Gronkowski took advantage of the empty left-hand field to work on their timing on pass patterns. Gronkowski then pulled safety Patrick Chung aside during a later team period. The two looked like they were discussing the finer points of how to evade a defender (from Gronkowskiâ€™s perspective) on a certain route, while Chung was explaining how the defensive player might respond to the offensive playerâ€™s moves.

Check out our favorite photos from the 10th day of Patriots Training Camp at Gillette Stadium on Tuesday, Aug. 7, 2018.

This Ad will close in 3 seconds

— Decker, incidentally, has looked good in his first two practices with the Patriots. Heâ€™s off to a positive start with his new team.

— At one point late in practice, Belichick was displeased with the work of his offense, so, he sent them on a lap around the goal posts at either end of the field. To spur on his teammates, wide receiver Julian Edelman began singing in a style that appeared to mimic that of a military drill instructor.

— At this stage of camp, tempers can often flare between teammates, but this has been a relatively calm summer in Foxborough in that regard. The closest we came to a dustup Tuesday saw LB Nicholas Grigsby and o-lineman James Ferentz exchange a few angry words with one another following a team period play in which they got tangled up. The incident quickly fizzled, however.

— In advance of Thursdayâ€™s first preseason tilt, special teams got a lot of work throughout Tuesdayâ€™s practice. Normally, just one aspect of special teams is focused on at camp sessions, but today, kickoff coverage, kickoff return, and punt coverage all had at least one period of work.

— The kickoff team featured a first line of (l-r) Devin McCourty, Cordarrelle Patterson, Marquis Flowers, Eddie Pleasant, and Brandon Bolden to the left of kicker Stephen Gostkowski. Nicholas Grigsby, Patrick Chung, Geneo Grissom, Brandon King, and Jordan Richards lined up to the kickerâ€™s right. Several other players rotated in for the next few reps, including Stephon Gilmore, Jason McCourty, rookies Duke Dawson and Jaâ€™Whuan Bentley, Jacob Hollister, Mike Gillislee, Jeremy Hill, and others. With the new NFL kickoff rules taking effect this season, five players must line up on either side of the kicker on every kickoff, including onside kicks.

— McCarron and rookie Braxton Berrios took turns fielding the kickoffs on the scout return team, and continued in that capacity when the kickoff return team became the focus of the next special teams period. From a coverage perspective, the new kickoff rules dictate that at least eight players on the receiving team must be within a 15-yard â€śsetup zoneâ€ť near and around midfield. That leaves just three other players to line up deep to receive the kickoff. Rex Burkhead, Jordan Richards, Jeremy Hill, and Dwayne Allen rotated as the up men for McCarron and Berrios in this particular period.

— From the back of the end zone, Cyrus Jones took mental reps during the kickoff period as he watched McCarron and Berrios handle the actual chores on the field.

— Richards served as the primary personal protector for punter Ryan Allen during the punt coverage period. In previous camp practices this summer, Demarius Travis has come in to replace Richards. Today, when rookie punter Corey Bojorquez subbed in for Allen, Chris Hogan stepped in to spell Richards as personal protector. It was noteworthy not only because this was the first time weâ€™ve spotted Hogan in such a role, itâ€™s also unusual to see such a high-profile player taking snaps in that spot. Travis eventually took a few reps at personal protector during the drill.

— Allen held placekicks for Gostkowski during all the field goal work Tuesday. Bojorquez has had his chances on previous days, but this time it was Allenâ€™s turn in the rotation. As the incumbent in the punting job battle, Allen seems to have a lead over his rookie rival through 10 days of practice. Gostkowski, by the way, nailed all of his field goal attempts from various distances and positions on and between the hash marks.

— During the â€śopportunity portionâ€ť of practice at the end of the morning (when younger players who are lower on the depth chart are featured in 11-on-11 action), more experienced veterans typically break off onto the other field in their respective position groups with their position coaches. Today, tight ends coach Nick Caley joined his charges â€“ Gronkowski, Jacob Hollister, Dwayne Allen, and fullback James Develin â€“ in running a few minutes of conditioning sprints. Caley is a young coach, and doing something like this is a good way to ingratiate himself with his players.

— Though heâ€™s a long-shot to make the final roster, rookie RB Ralph Webb of Vanderbilt is quietly making a case for a potential spot on the practice squad. Webb took advantage of Michelâ€™s prolonged absence and had perhaps his best day carrying the football on Tuesday.

— The blue medical tent that pops up behind the bench when a player requires observation and treatment during games is also being used this summer for training camp practices. During the first nine days of practice, the tent went up only when a player needed attention, but on this Day 10, the tent was pitched early and left that way for the entirety of practice. Ironically, no players needed to be ushered inside today.

— Patriots owner Robert Kraft made his usual appearance on the practice field midway through practice. He stopped to chat on separate occasions with invited guests who were also on the field, including Pat Hill, the former Fresno State head coach and Bill Belichick assistant in Cleveland, and Al Groh, former University of Virginia head coach and a longtime colleague of Belichick at several NFL stops.

— Former Patriots linebacker Willie McGinest also paid a visit to the sidelines of practice Tuesday. It was recently announced that McGinest will be the subject of one of this yearâ€™s â€śA Football Lifeâ€ť profiles on NFL Network.

— PFW colleague Andy Hart is fascinated annually by the appearance of Canada geese at training camp. The birds frequently fly in V-formation over the practice fields behind Gillette while the team is practicing. A group of about a dozen did so again Tuesday. Clearly, thereâ€™s some sort of goose flight pattern over Foxborough, although itâ€™s unclear if they have clearance from the FAA to do so.