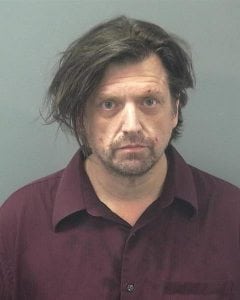 On July 25th at approximately 7:44 p.m., Mesquite Police received information about a disturbance occurring at a residence on Bannock St.Â  Responding officers were advised a male suspect had forced entry into a neighboring residence then returned to his own home.Â  Arriving officers made contact with a male suspect acting belligerent and making threats.Â  The suspect then began brandishing a firearm and threatening to shoot at officers. Officers immediately began making the area safe for neighbors and bystanders while containing the suspect in his residence.Â  The Mesquite SWAT team responded and a crisis negotiator began making contact with the suspect and attempting to get him to peacefully surrender.Â  At approximately 11:40 p.m., the suspect began shooting at the SWAT officers with a high-powered rifle.Â  The suspect fired 8 rounds through the front window of the residence while officers were taking cover behind their armored vehicle, but the suspect never exited the residence.Â  Officer began putting chemical OC projectiles through all of the windows of the residence while the crisis negotiator continued attempts to get the suspect to peacefully surrender.Â  Officers also continued broadcasting messages through their vehicle public address system to peacefully exit the residence and surrender to awaiting officers.

Joseph Daut, 51, of Mesquite Nevada, was arrested and is currently being charged with: 8 felony counts of attempted murder on a police officer.

Mesquite Detectives are still actively processing the crime scene and investigating the incident.Â  Further criminal charges are pending the completion of the investigation.

Mesquite Police Chief Troy Tanner commented on the incident; â€śI am proud of the professionalism and restraint our officers used throughout this stressful 12 hour incident.Â  Our specialized equipment and training most likely saved officersâ€™ lives.Â  It is so important that our officers have as many tools as possible available to them in order to fulfill our mission of safeguarding the lives of our community members, even when they are attempting to do us harm.â€ť

« Jon Gruden-Khalil Mack drama? Plus, a Dez Bryant fit and more Teaching your dog not to jump up on you »