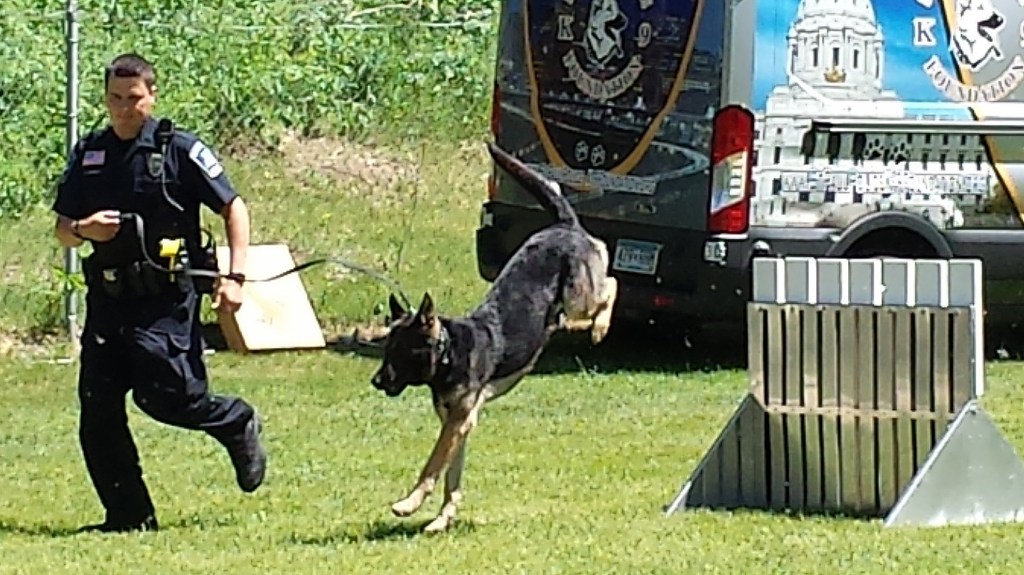 After five days of St. Paul police K-9 demonstrations at the Minnesota State Fair, St. Paul Mayor Melvin Carter told the police chief to call them off for the remaining seven days of the Fair.

Carter‚Äôs press secretary, Liz Xiong, said the mayor determined it was best to ‚Äútemporarily discontinue demonstrations for the remainder of this year‚Äôs State Fair‚ÄĚ in light of the ongoing audit of the police department‚Äôs K-9 unit.

The review is underway after three high-profile instances in the past two years in which St. Paul police dog bit and injured people who were not suspects.

Carter ‚Äúlooks forward to resuming this tradition next year, once the audit has been completed,‚ÄĚ Xiong said.

The mayor called Police Chief Todd Axtell on Monday night after learning that a show dog ‚ÄĒ not a St. Paul police dog ‚ÄĒ had bitten a child at the Fair that day, according to Xiong. That incident ‚Äúwas certainly a factor for the decision to temporarily discontinue St. Paul canines being part of the demonstrations there,‚ÄĚ she said.

Axtell had made the initial decision to have the K-9s at the Fair this year ‚ÄĒ a tradition since the late 1980s ‚ÄĒ but he ‚Äúrespects the mayor‚Äôs authority and did as he was instructed,‚ÄĚ a Steve Linders, a St. Paul police spokesman, said Tuesday.

‚ÄúIt‚Äôs not only me, but I‚Äôm sure the officers are disappointed because they enjoy interacting with the public there, and I know certainly people at the Fair are going to be very disappointed,‚ÄĚ Romero said. ‚Äú‚Ä¶ To stop it midway through the week, I just don‚Äôt understand.‚ÄĚ

Carter went to the Fair on Monday but did not make it to the K-9 demonstration, and his decision was unrelated to his visit, Xiong said.

There will be no St. Paul police K-9 demonstrations until the review of the unit, scheduled to take six months, has been completed, Xiong said. A K-9 demonstration slated at the summer‚Äôs final Safe Summer Nights, a weekly barbecue with police officers and the public, was canceled for Thursday, Linders said.

Romero said he doesn‚Äôt see how a show dog biting a child should affect the K-9 demonstrations. Officers took further precautions this year to keep the police dogs behind a fence, so people could still see them at the booth but not touch them, Romero said.

On Monday, a German shepherd show dog ‚ÄĒ not a police dog ‚ÄĒ bit an 8-year-old boy who had leaned over to look at the dog in the¬†Pet Pavilions, which housed the St. Paul police K-9s and also nonpolice dogs, said¬†Brooke Blakey, State Fair Police public information officer.

An officer at the St. Paul Police K-9 Foundation booth heard about it and provided first aid, Linders said.¬†Paramedics evaluated the boy, who had scratches and didn‚Äôt need treatment at a hospital, according to Blakey.

The St. Paul Police K-9 Foundation, a nonprofit supporting the K-9 unit, still will have a booth in the Pet Pavilions. But Romero said the daily 7 p.m. demonstrations were the big draw during each of the 12 days of the Fair.

‚ÄúI think the first question out of everybody‚Äôs mouth when they walk up to our booth is, ‚ÄėWhat time is the demo?‚Äô ‚ÄĚ Romero said. ‚ÄúI tell them to get there early to get a seat.‚ÄĚ

More than anything, the presence of the K-9s at the Fair and the demonstrations were a ‚Äúgreat tool we use for education, community engagement and the enjoyment of Fairgoers,‚ÄĚ Linders said. ‚ÄúIt‚Äôs a great opportunity for people to meet their officers and see the way they work with K-9s.‚ÄĚ

Police use of K-9s was among the concerns raised at a protest¬†Saturday that ended at the Minnesota State Fair, with people¬†calling for better control of police dogs.

In July, Carter and Axtell announced St. Paul police dogs¬†would be used more sparingly¬†amid ‚Äúsignificant changes‚ÄĚ to the K-9 unit and there would be an external audit of the unit.

The decision came after¬†police responded to a report of a male with a gun in the street in Dayton‚Äôs Bluff early July 6. The suspect fled and, as police searched for him, 33-year-old resident Glenn Slaughter headed out of his home to go to work.

Slaughter was not involved in the weapons calls, police said. Officers asked him to lie on the ground for his safety, which he did. A K-9 officer responded to the scene and ‚ÄĒ after his police dog‚Äôs collar broke ‚ÄĒ the dog ran free toward Slaughter and bit him, according to the police department.

In September, a¬†St. Paul police K-9 bit a woman who was taking out her trash, and the dog also¬†didn‚Äôt respond to officers‚Äô commands to release, according to a federal lawsuit filed against the city by attorneys¬†Andrew Noel and Robert Bennett, who are now also representing Slaughter.

Bennett and Noel also represented Frank Baker after he was bitten by a St. Paul police K-9 and hospitalized for two weeks. The¬†city agreed to a record-setting $2 million settlement¬†in that case.