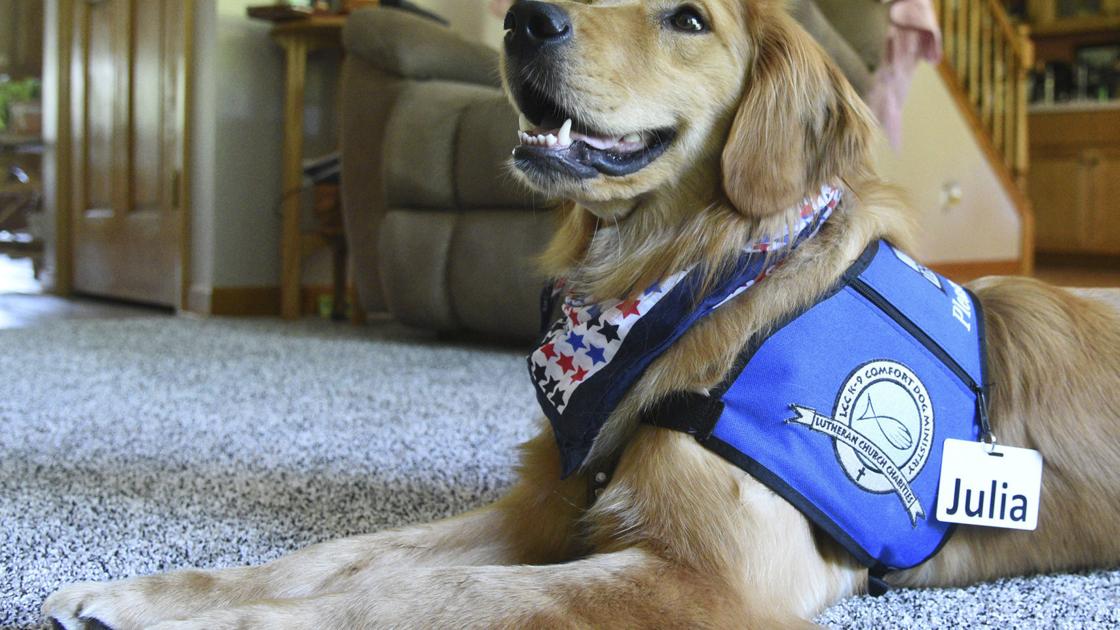 ELGIN, Ill. (AP) ‚ÄĒ The job of the newest staff member of King of Glory Lutheran Church in Elgin is to spread love … on four paws.

Julia, a 1¬Ĺ-year-old golden retriever, is a trained comfort dog who joined the church in June. Her work is all about connecting with people, the Rev. Doug Swanson said. ‚ÄúWe were looking for ways we could bring love into the community,‚ÄĚ he said.

‚ÄúShe is a working animal. She‚Äôs not a pet,‚ÄĚ he said. ‚ÄúShe gets up and goes to work. … The idea is to be able to interact with our community ‚ÄĒ visit nursing homes, school facilities, anywhere we can think of, where we can take her and use her as a way of loving on people around us.‚ÄĚ

Julia was trained by Lutheran Church Charities, which has had a police dog comfort dog ministry program since 2008.

The church raised $15,000 for training expenses and was on a waiting list for a dog for nearly two years, Swanson said. The church owns the dog, while Lutheran Church Charities owns her comfort dog vest, which means that if Julia were to fail in her duties, her status as comfort dog could be revoked, he explained.

Handlers train three days to get to know the dogs and the commands they follow, as well as how they connect with people, Ponsolle said.

Julia has adapted well to her new home and promptly responds to commands such as ‚Äústand,‚ÄĚ ‚Äė‚Äôstay,‚ÄĚ ‚Äė‚Äôwalk backward,‚ÄĚ ‚Äė‚Äôgo on lap‚ÄĚ and more, Ponsolle said, although she occasionally strays in her behavior, such as by enthusiastically trying to lick a reporter‚Äôs face on a recent morning.

‚ÄúIt‚Äôs about building a relationship, finding out if (people) have needs, and praying for them,‚ÄĚ he said. ‚ÄúSometimes you only have 15 seconds you might try to talk to people; sometimes it might last an hour.‚ÄĚ

Lutheran Church Charities‚Äô program started 10 years ago with four dogs and has grown to about 130, said Tim Hetzner, the organization‚Äôs president and CEO. Dogs get 2,000 hours of training at the Northbrook headquarters or in Nebraska, and are placed with churches, schools and universities, he said.

The program has a component for military veterans and their families, and active and retired police officers, he said.

Lutheran comfort dogs have responded to several national tragedies, said Swanson, who has experience with a comfort dog at a Darien church. That includes shootings at Sandy Hook Elementary School in Connecticut, and Pulse nightclub and Marjory Stoneman Douglas High School in Florida.

‚ÄúWhen I got called here, I always wanted to get involved with another comfort dog,‚ÄĚ he said. ‚ÄúIt‚Äôs really about loving the people in our community, finding ways to make connections. We‚Äôre not particularly concerned with whether they come to King of Glory.

‚ÄúWe recognize life is hard, and if we can do something to put a smile on people‚Äôs faces, that‚Äôs what we want to do.‚ÄĚ