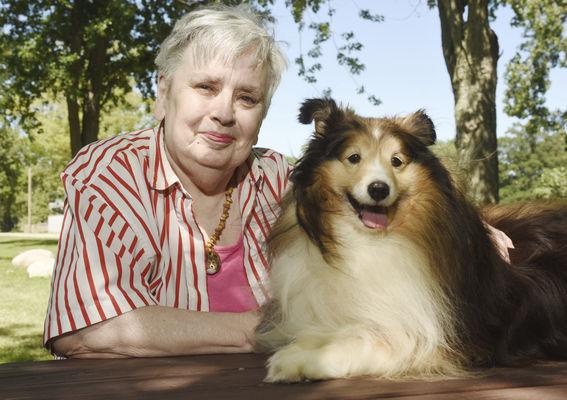 At one time, the Benton Township resident had about two dozen canines living on her property.

But that comes as no surprise to the people who know her as the longest-tenured member of the Berrien Kennel Club. Having joined the club in February 1973, Keith has accumulated years of experience with dogs of several breeds.

Now¬†the 74-year-old focuses on Shelties, including one dog who goes by the name Mac.

Keith, accompanied by Mac, sat down with Herald-Palladium Staff Writer Tony Wittkowski to chat about her years with the club¬†and what connection she shares with dogs.

How many dogs do you have now?

What‚Äôs the most you‚Äôve ever had at one point?

About 24. They were¬†mostly adults. Accumulated through the years. I don‚Äôt really breed. I got into being a 4-H leader back in 1980. The Berrien Kennel Club is very involved in 4-H.

How did you get introduced to¬†this kennel club?

I found an ad in your paper for meetings and for dog training. I went to the meeting and they had a veterinarian there talking. He was talking about heartworm. After that, I took my dog in and he had heartworm. So, I decided to join up with this club because of how informative it was. They wanted to help people and I wanted to be a part of that. I‚Äôve been there ever since.

Wow. How many years have you been a member?

Forty-five years as of this year. I like being with people that have dogs. If I‚Äôm gonna have a hobby, I want it to be something I‚Äôm comfortable with.

When did you get your first dog?

I think I‚Äôve had a dog since I was a little kid. I don‚Äôt remember being without one. Now I go for Shetland Sheepdogs like Mac here (motions to her dog). They‚Äôre known as Shelties.

Where does his name come from? Is it short for something?

Mac is short for MacDreamy. His breeder named him McDreamy. But we had to change the spelling a little bit because the AKC (American Kennel Club) wouldn‚Äôt let us infringe on the name ‚ÄúDr. McDreamy.‚ÄĚ So, we spell his name as Mac.

When it comes to naming the dogs for shows do you ever get creative like horse breeders do?

There‚Äôs one named Yabadabado. Now the dog looks like she‚Äôs going to be a champion show dog.

What‚Äôs your favorite part of being a kennel club member?

The camaraderie with the other people who¬†have show dogs. You meet a lot of interesting people. Some want to champion certain breeds, others want to help the public when it comes to training. If you don‚Äôt have a well-trained dog, what‚Äôs the point?

What are some of the dog breeds that are hard to train?

There are some stubborn ones. Sled dogs can be stubborn. Huskies are very popular because of their blue eyes, but they‚Äôre very stubborn. They want to go their own way. They‚Äôre runners.

Was there anything about showing that surprised you?

The amount of it that was being done. I did not know there were so many dog shows going on. I was familiar with horse showing and horse racing.¬†

I know it‚Äôs probably a nightmare for the owner, but I like those videos where the dog that‚Äôs being shown doesn‚Äôt go through the course correctly and does their own thing.

Oh yeah. I‚Äôll never forget this dog I had named Soup. On the last leg of the trials ‚Äď everything was going great ‚Äď I looked at him and thought everything is all set. If he gets this, we‚Äôll be all done. I called him and he sat there and looked at me. He knew to come. He came halfway across the ring, looked at me, and headed out of the rink. I was so embarrassed and everyone started to laugh.

What‚Äôs your greatest memory with this kennel club?

There have been a lot of different moments. My greatest memory would be when I was made Outstanding Member of the Year. It was back aways. It was either in the¬†‚Äô70s or ‚Äô80s. You don‚Äôt remember them after awhile.

How many dogs over the years have you owned?

Fifty at least, but probably closer to 75. It‚Äôs not like they were all at one time.

If you were to pitch the kennel club to someone who is getting their first dog, what would you say?

It‚Äôs a great way to get involved with people who train dogs. They could learn a lot. It always helps to train your dog.

« Are there ways to protect my pets and family from coyotes? Maywood Honors Woman Who Risked Her Life To Save Someone In Dog Attack »