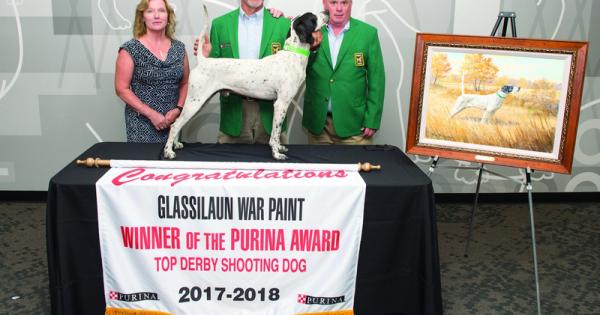 Glassilaun War Paint, as Bat is formally known, earned 1,034 points from placements in eight points-earning shooting dog stakes, including four wins, to top a 53-dog field and finish nearly 300 points ahead of the runner-up.

‚ÄúBat is a classy, talented and animated bird dog who runs a forward race and has a stylish point,‚ÄĚ said pro Toby Tobiassen of Catskill, who handled Bat during his derby season. ‚ÄúHe‚Äôs smart, easy to train and adapts to any type of country he‚Äôs running.‚ÄĚ Bred by John Neely of Albany, Georgia, Bat is owned by Jamie Nee of Quincy, Mass., who credits the win to his late father, Denis. ‚Äú‚ÄėGlassilaun‚Äô is Gaelic for ‚ÄėGreen Island,‚Äô the Irish village where my father grew up. He introduced me to bird dogs and field trials when I was 10 years old. Bat is one of the best bird dogs I have seen in more than three decades,‚ÄĚ Nee said.

Team Bat was recognized at a ceremony in June in St. Louis, where they received an oil painting of Bat by artist Ross Young, a satin award banner, the traditional green blazers given to the Purina Top Shooting Dog Awards winners, a Garmin Pro 550 training collar, and a year‚Äôs supply of Purina Pro Plan SPORT Performance 30/20 Formula, the food fed to Bat to become the 6th annual Purina Derby Top Shooting Dog. The Purina Derby Shooting Dog Award program, administered and scored by a committee of experienced bird dog enthusiasts, has recognized the country‚Äôs derby top shooting dogs with their owners and handlers since the 2012-2013 season.