Autism service dogs can keep a child safe and calm, but their trainers aren’t always allowed in public places

On a platform between GO Trains at Union Station, Deanna Allain gives her dog Carlin a firm tug on the collar.

The 90 pound chocolate labrador retriever looks up at her, but doesn’t budge.

Despite appearances, Carlin isn’t being stubborn or disobeying an order. Instead, he’s performing a command that could one day save a child’s life.

Sometimes they’re runners, and if they’re overwhelmed they try to flee a situation.– DeannaÂ Allain

The skill is called “anchoring,” which can be used to keep a low-functioning autistic child from taking off during a moment of panic, especially vital in dangerous environments like a train station.

“Sometimes they’re runners, and if they’re overwhelmed they try to flee a situation,” said Allain, a volunteer puppy raiser with Autism Dog Services, whichÂ provides trained service dogs to families with a child on the autism spectrum.

“The dogs can be tethered to the child and help to keep them safe instead of running into traffic or away from school.”

Along with anchoring, Allain is training the 21-month-old lab to perform other tasks designed to keep an autistic child calm during difficult moments.

On cue, Carlin can rest his head on a child’s lap to provide some soothing contact.

If a child sits on the floor, the dog instinctively plops his head and front legs on top of the child, like a living, furry weighted blanket. 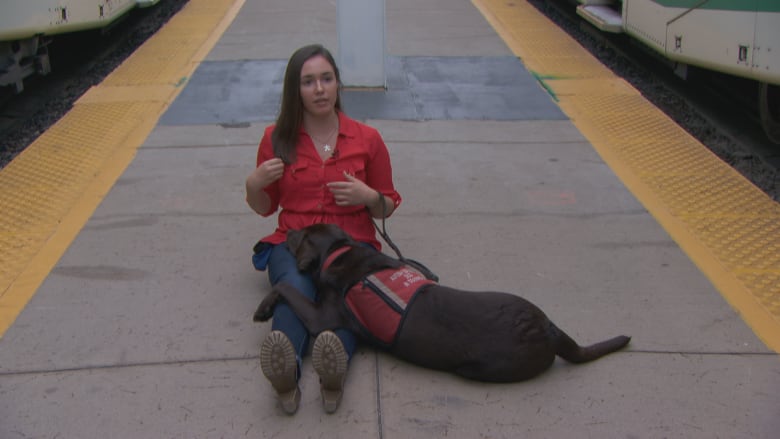 Carlin demonstrates his “deep pressure therapy” command, which can be used to calm a child with autism. (Richard Agecoutay/CBC)

“In those situations the dogs are trained to be able to provide therapy and to lay over a child and provide that deep pressure therapy in any environment,” said Allain, who’s just 18 but has been training dogs for nine years.

Allain has been working on the commands with Carlin since he was a three-month-old puppy. The work has involved desensitizing the dog to all manner of sights, sounds and smells.

“You never want a dog to be uneasy, which is why it’s so important to be able to take them out in public places,” she said.

While Carlin is on his way to graduation and joining a new family, Allain said the training process has been difficult at times due an uneven ability to train the dog in public spaces.

Under Ontario laws and Canada’s human rights code, people with a physician’s note are permitted to bring service animals into most public places. However, the people who train service dogs are not given the same freedom.

“If a service animal has never been in a restaurant, or never been in a public transit stationâ€¦ how are they going to function for the first time providing assistance for the person with the disability they’re assisting?” asked David Lepofsky, a lawyer and chair of the Accessibility for Ontarians with Disabilities Act Alliance. 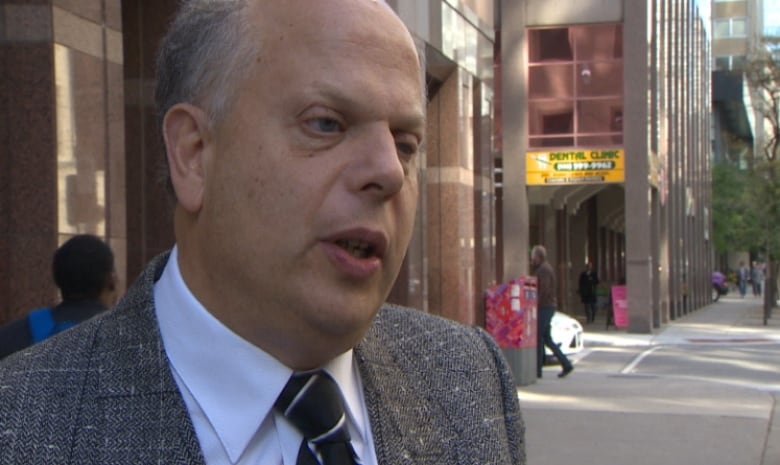 Allain said she’s been turned away from some properties and schools during Carlin’s training.

“Anywhere I go out in public, it’s at the discretion of the service provider or building owner as to whether or not I’m allowed to train in that environment,” she said.

“It has come up in situations where people are challenging our ability to train service dogs.”

A call for updated laws

In recent years, governments in Nova Scotia and British Columbia have made similar amendments.

Lepofsky says the most practical way to grant certified trainers similar access in Ontario would come through updates to the Accessibility for Ontarians with Disabilities Act, which would not require approval from the legislature.

Without that law in place, Allain credits organizations such as Metrolinx â€” which operates Union Station and GO Trains â€” for providing access during the dog’s training.

“I really don’t think that any of the things that Carlin is able to do now would have been possible without having the right to public access or having businesses so willing to provide public access for his training,” she said.

A spokesperson for the Ministry for Seniors and Accessibility said the ministry will continue working with stakeholders in Ontario to raise awareness of accessibility issues.

“Individuals who train service animals for specific purposes are encouraged to work with organizations directly to ensure that they are able to access public spaces,” Aleks Dhefto said in an emailÂ statement.Â