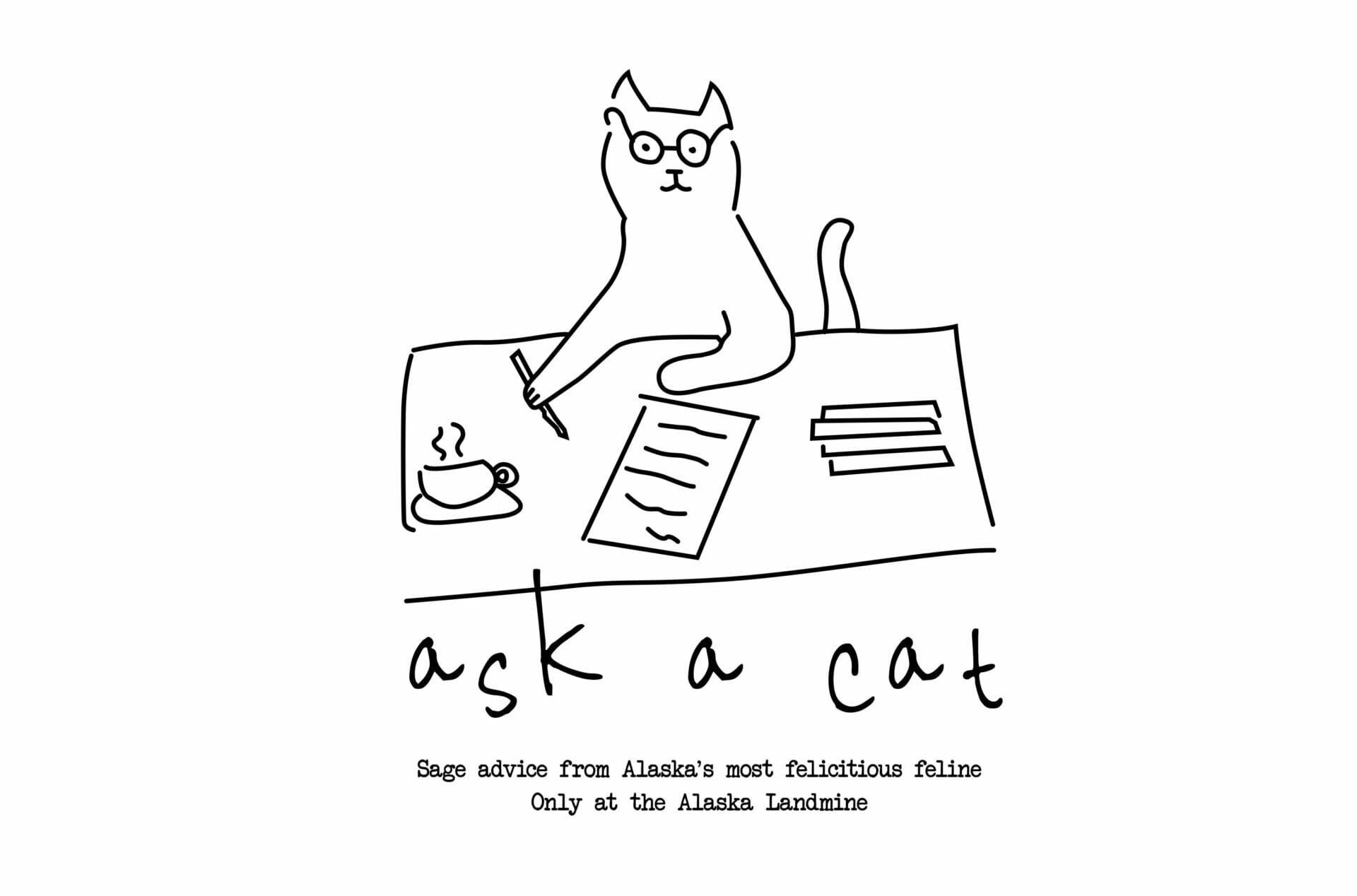 Ask a cat is new advice column featured in the Alaska Landmine. Have a question for the Cat? Email askacat@alaskalandmine.com to get the answers to any of lifeâ€™s problems.

I own a dog but my boyfriend has a shy little cat. The two have not yet met and my boyfriend is concerned that the dog may chase and frighten his cat. He is now avoiding the issue and making excuses for why the dog and cat cannot meet. How do you suggest I convince him to address this?

Cat suspects there are underlying relationship issues at play. Also, as might be presumed, I side with my feline brethren. The burden of proof that your dog will not physically or emotionally damage his cat is on you. You claim boyfriend is avoiding the issue â€“ but have you made an effort to show how you will practically manage an overzealous mutt that may mangle his precious kitty? Have you demonstrated your dogâ€™s ability to control himself, not steal kibble, and not commandeer his catâ€™s toys? Demonstrating your dogâ€™s good training and the effort youâ€™ve put forth may ease his nerves.

Itâ€™s also possible that the cat represents his emotional unavailability. You also donâ€™t mention if you both had your respective companions prior to becoming a couple. Did you get a dog without running it up the scratching post first? If so, perhaps dog represents that you donâ€™t consider your partner in your long-term plans.

In the end, it is Catâ€™s opinion that rarely do a dog person and a cat person coexist peacefully in the long term. Thoughts and purrayers figuring that out.

If the legislative body is not allowed to use the TikTok app on their devices, how do we expect them to learn new dance moves, cooking techniques and run our state effectively?

Cat finds the majority of the local legislative body offensive to dignity and intelligence in general. I suspect they are mostly â€śdog people.â€ť They pout and grumble over losing access to the clock app on their government issued devices â€“ do these dingleberries not own devices of their own? Must we subsidize their dance moves? Is there anyone of note in local government Cat would want to see flail about on the interwebs? Cat thinks not. Had they ever run the state effectively in the first place, Cat might give attention to their yowls. Alas, I look at this as a much-needed character-building opportunity for a bunch of deplorable dachshunds and snowflake samoyeds.

On New Yearâ€™s I ended up at a different party as my boyfriend. Late in the night, an intoxicated acquaintance kissed me. I immediately stopped him and left the party. I did not tell my boyfriend because I was afraid I would make him upset and frankly just did not think he needed to know. I donâ€™t believe I did anything wrong that night, but a friend strongly believes that I was wrong not to tell my boyfriend? What does the Cat think?

Cat thinks you should get in your time machine and tell your boyfriend what happened as soon as it happenedâ€¦ unless you are not as innocent as you claim. But let us set that sentiment aside for now.

For the sake of your answer letâ€™s assume you are not guilty in this incident, as I am not given any evidence to the contrary. While Cat appreciates mystery and a general sense of aloofness, there is a time and a place. If you truly value your relationship and are willing to eschew your mutual acquaintance with a firm paw, I advise you to come clean. An unwelcome kiss makes you the victim in this event and Cat believes resolutely that you have nothing to fear from an understanding partners response to such. Often it takes time to process feeling violated, and hopefully your partner will be understanding to this plight.

No one deserves to be slobbered on without consent.

Thoughts from the Cat (mail)box:

This week I received a very forlorn question from a sad human bemoaning that 49erâ€™s QB Jimmy Garoppolo would (probably) never run his hands through his hair and assure him everything will be alright. Cat appreciates that sometimes we all need to be given a warm bed and a scratch behind the ears. Iâ€™m sending you all catnip wishes and sunspot nap dreams.

The Cat was born and raised in Alaska. Cat enjoys kibble, naps, and telling humans how to live their lives.