As soccer team mourns, a rainbow appears: ‘I definitely know it was from Rachel.’

The rain was coming down hard Wednesday and Iroquois’ girls varsity soccer players were getting nervous. Their first game of the season against Cheektowaga looked like it was going to get canceled.

It wasn’t just any game.

It was to be their first since one of their beloved teammates, Rachel LoFaso, died at the age of 16 in a car accident in January that devastated her friends, family, school and community in Elma.

And it was to be the first time they all would be wearing their new jerseys honoring Rachel â€” white with lilac lettering and a RL memorial patch on the sleeve â€” and training warm-ups with a big purple heart on the back.

“We’re not going to get to play our first game,” the girls grumbled in a locker room where they were waiting out the storm.

“Have a little faith,” their coach Rich Violanti said he told them.

In the seven months since Rachel’s death, her friends and family have grieved but they also have been inspired to memorialize her in ways they believe she would have loved.

Her friends covered her red locker at school with sticky notes with messages of love and remembrance.

In the spring, loved ones filled the creek in Elma Village Green Park with flowers.

Rachel loved animals, especially dogs, so her classmates baked and sold dog treats they made themselves in the school cafeteria with flour, peanut butter and sugar. They are using that money, combined with donations raised from selling wristbands that read “Our Angel Rachel LoFaso,” to buy a new water fountain for people and dogs at the park. It’s going to be unveiled in a few weeks.

Violanti and JV coach Renee Reedhardt knew the fall season would be difficult for Rachel’s teammates on the Lady Chiefs.

They all were good friends and Rachel had worked hard to get on the team. Last fall, she didn’t quite make the cut for varsity â€” but Reedhardt offered her the option of playing junior varsity. If she played well, there would be a chance she could go up to varsity by the end of the season.

“She struggled with it a little while,” Reedhardt said.

Then one day, she showed up for JV practice. “And I said: ‘This is awesome,’ ” Reedhardt said.

Rachel worked hard and played well. About halfway through the season, Violanti and Reedhardt decided that Rachel was ready to be pulled up to varsity. 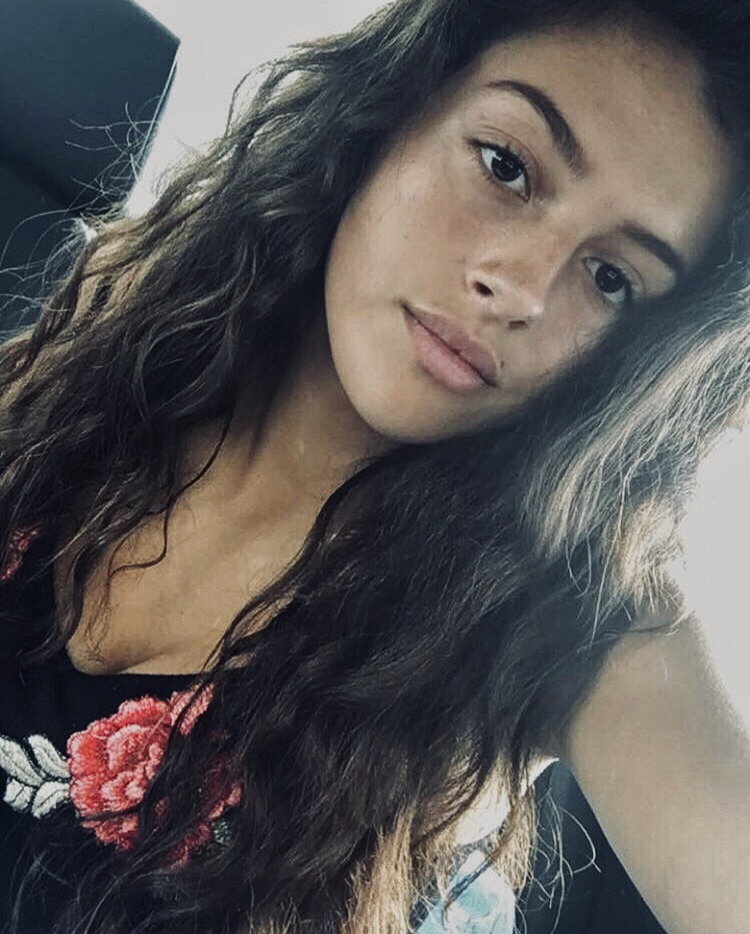 “She did something not a lot of kids can do: She pushed through all of that teenage stuff to do what she really wanted to. That’s something,” Reedhardt said.

Before getting on a school bus to a game, Violanti told the varsity team members that Rachel would be joining them â€” but they had to keep it a secret until after the game.

Rachel was thrilled when her coaches told her the news.

“She did very well,” Violanti said. “She fit right in. She belonged. She proved me wrong.”

Rachel would have been back on the team with all of her friends again this fall, this time as a senior.

Practice started on Aug. 13. That first week, Violanti surprised the team with the new jerseys that the team’s three captains helped him design.

Every year, the team does a bonding event, usually along the lines of a pizza party. This year, the varsity squad asked for the chance to visit Rachel’s grave at Forest Lawn in Buffalo.

On Aug. 25, the girls took a school bus to the historic cemetery. The group of 20 girls sat around her grave in a circle while the coaches stood back, giving them some space.

The girls shared stories, spread flower petals on the grave site and said a prayer.

It was difficult, said Aussie Mariacher, 17, who knew Rachel since the first grade. But it helped to make the sad journey together with her teammates.

“With our whole team, it was a lot easier,” she said. “We were there for each other.” Afterward, the girls went to Riverworks where they did a ropes course and had some pizza.

Before the game Wednesday, Violanti had not planned to say too much about Rachel. On the bus ride to Cheektowaga, they sounded excited â€” about the game and about their new jerseys. But he knew the girls’ hearts would already be heavy.

They waited about an hour in the locker room before the thunder and lightning stopped. They came outside to the field and started warming up. About a half hour after the game was supposed to start, the referees called to them to get ready to play. 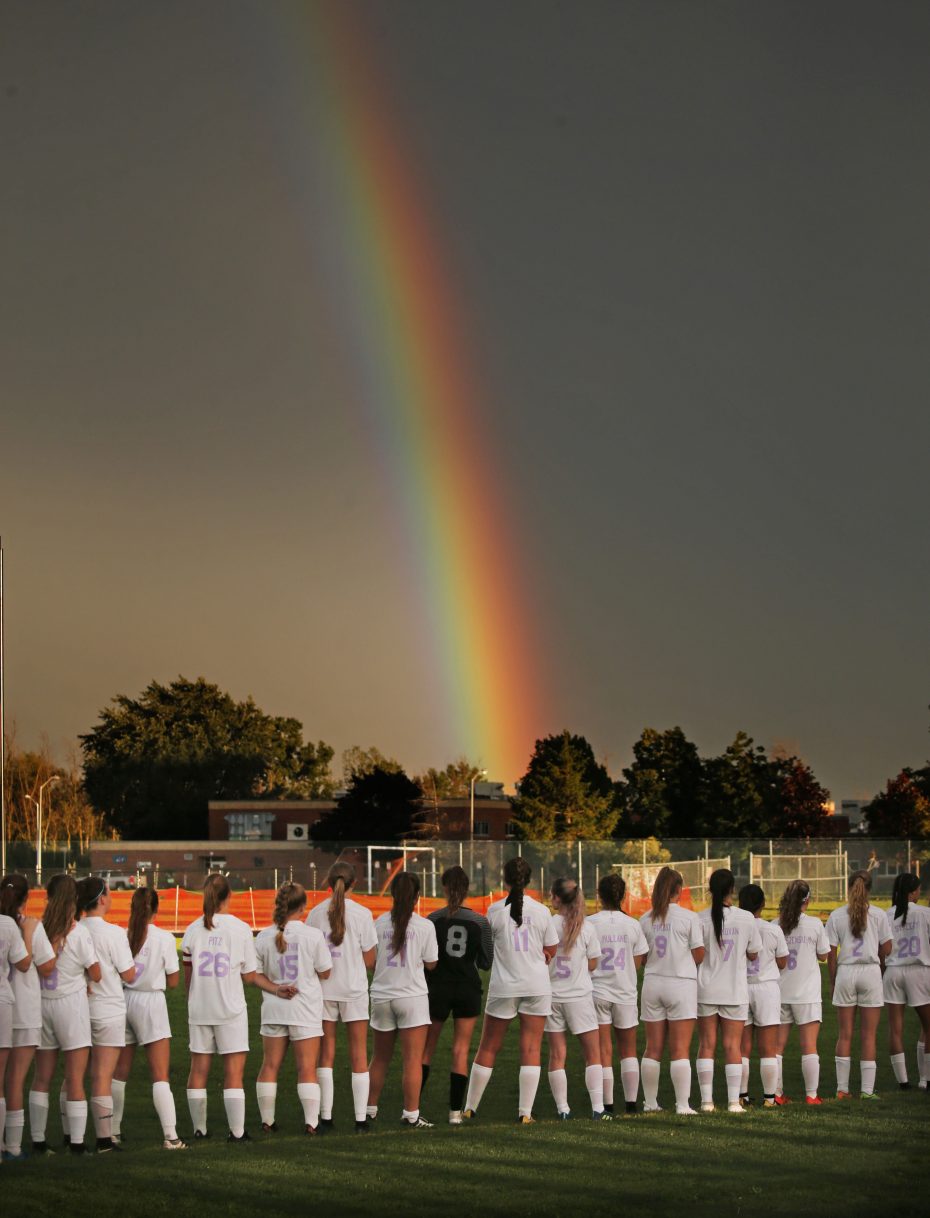 A rainbow appeared just as the Iroquois/Cheektowaga girls varsity soccer game was about to begin on Wednesday, Aug. 29 in Cheektowaga. It was the first game the Iroquois team played since the death of their teammate, Rachel LoFaso, in January. (Robert Kirkham/Buffalo News)

As the girls lined up and began taking off their warmup gear, Violanti looked up at the parting clouds.

“I stood on the field and I just couldn’t believe it,” Violanti said.

A brilliant rainbow, in the most vivid colors he had ever seen, spanned the field.

“You guys know who that is, right?” Violanti asked the girls.

“We all felt she was watching over us,” said Story Kirkham, 17, who had been friends with Rachel since seventh grade.

Story’s father, Buffalo News photographer Robert Kirkham, had just gotten to the field. He was happy to learn that the game had been delayed so that he could watch the start of his daughter’s game. Kirkham saw the rainbow and ran back to his car to grab his camera and snapped the rainbow behind the varsity team. “I kind of teared up,” he said as he took the photo at 7:32 p.m.

The girls asked to grab their phones and they all began snapping pictures of the scene in front of them.

Aussie said she texted the rainbow photo to her father, who happened to be having dinner with Rachel’s father, Fred LoFaso in Batavia. They could see the rainbow there too and they texted a photo of what they could see.

Fred LoFaso said the rainbow brought him both sadness and joy â€” the second time in just a few days. That previous Friday, he and his partner,Â Jennifer Mogensen, had taken in a foster dog as a tribute to Rachel. But within a few hours, Stormy the 9-month-old Shih Tzu and Maltese puppy ran away in the Village of Hamburg. Tuesday, LoFaso and his son, Donald, had gone searching for hours in a Hamburg cemetery, leaving bits of hot dog and cheese. Fifteen minutes after giving up for the day, a man walking his own dogs spotted Stormy and LoFaso came back and brought the puppy home.

With the new school year started, LoFaso said he has thought a lot about his daughter. Seeing school supplies in the stores, dropping off his son at soccer. “Every little thing triggers it,” he said.

LoFaso was touched by the photos of his daughter’s teammates in their new uniforms, reminding him of the continual outpouring of love he received from the school and his community after her death.

As for the rainbow that appeared just as the first soccer game of the fall season at which his daughter would have been proudly playing her heart out,Â LoFaso said, that wasn’t just a meteorological phenomenon:

“I definitely know it was from Rachel.”