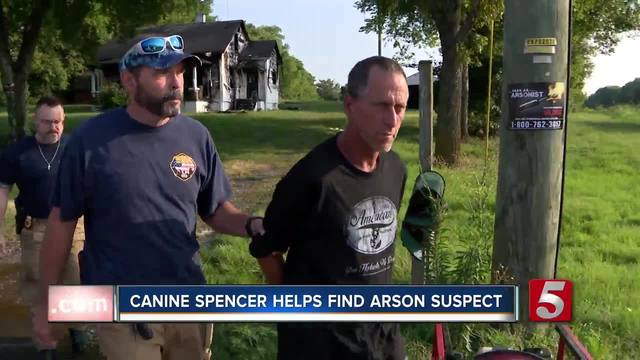 Spencer has been with the Nashville Fire Department for about 3 months.

When firefighters battled a blaze in Madison, they felt something wasn’t right.Â They called in Spencer and the fire investigators to help out.

“When we came out to do that, he [Spencer] was taking me away from the house and ultimately lead us to a shed where we found our suspect,” said Mark Sells.

Spencer tracked the suspect, Donald Todd, to a nearby she where he was hiding.Â He searched it with another fire investigator, taking ToddÂ into custody for arson.

According to a report, Todd threatened to burn down the house during a fight with his girlfriend. It’s not his first time being in trouble with the law.

“We were told by the other detectives he’s a person of interest in over 25 burglaries in Madison so they was pretty glad that he was found and caught,”Â Sells said.

Spencer got a lot of treats and love at the Nashville Fire Department on Wednesday. When he’s not being congratulated, Spencer loves to work.

“Once that food pouch goes on, he’s strictly business.”Â

Spencer was originally in training to be a seeing eye dog, but he was better at detecting materials used by arsonists.

In a demonstration, he was able to smell out a drop of gasoline on the ground in seconds.

Sells said, “A scene that might take us six, sevenÂ hours looking for an accelerant, with him just a couple minutes.”

Spencer usually signals Sells by lying down and placing his front paws aroundÂ the arson evidence. They take samples, and send them off to the lab.

Sells said, “So far, everything’s he found has been validated by the TBI.”

It seems that Spencer has a bright future ahead of him.Â The pup celebrated his second birthday this month.Â Â

Fortunately, no one was injured at the house fire in Madison. It remains under investigation

« How to keep your dog safe while traveling Pets, Pets, Pets »