Arlington Pet of the Week: Hugo 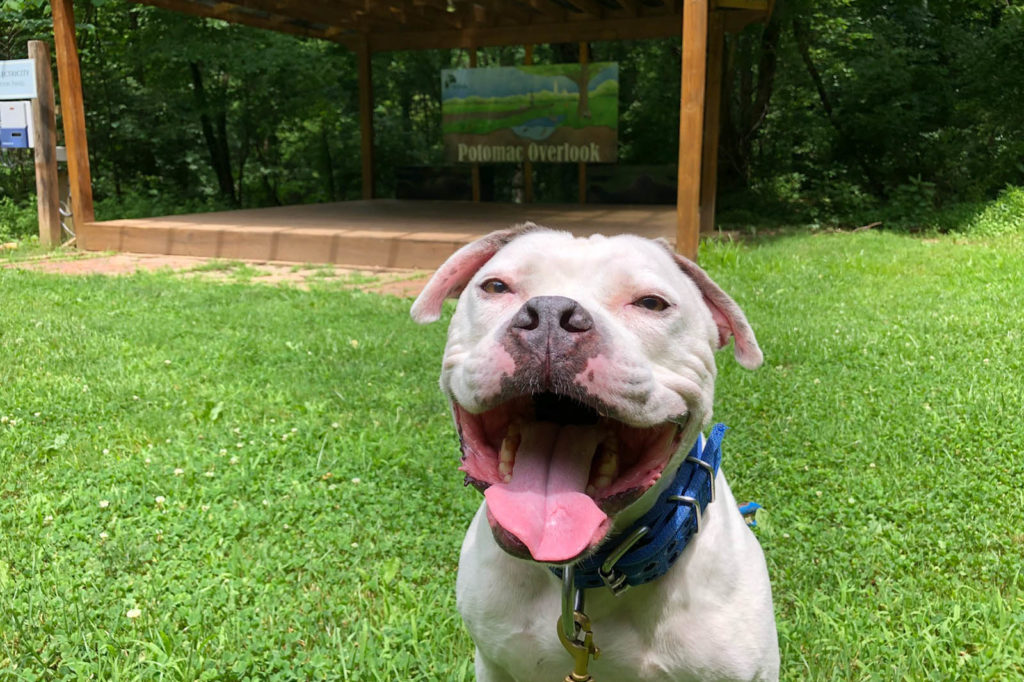 This weekâ€™s Arlington Pet of the Week is Hugo, a rescue who gives back as a certified therapy dog.

Hereâ€™s what Hugoâ€™s owner, Tim, had to say about him:

This is Hugo! He is a 7-and-a-half-year-old American Bulldog/Terrier who loves to snuggle! He had quite a journey to get to Arlington but loves living here now! Originally from DC, he did not have the best start to life as he was mistreated and neglected. HeÂ arrived in the Humane Rescue Alliance shelter with ears so badly infected, they had to be removed. As a deaf, full-grown Pit Bull-type dog, his chances of adoption were low, but his incredible personality always shone through. He was rescued 5 and half years ago and moved to the Courthouse neighborhood where he loves to hang out and sniff in the Plaza but enjoys visiting Potomac Overlook and Gulf Branch trails every chance he gets! He also loves going to his Bay House where he sunbathes, kayaks, and occasionally thinks about swimming.

Today, Hugo loves to give back as a volunteer! As a PAL certified Therapy Dog, he visits the ASPAN Shelter and GWU Hospital weekly, and Arlington libraries twice a month where his big smile and sweet disposition bring comfort and a smile to everyone he meets. He was featured on the WUSA9 news for his Paws to Read work at Central Library and in Menâ€™s Health Magazine last summer as an Ultimate Dog Finalist. He also has done a lot of fund raising for his old shelter, raising tens of thousands of dollars for HRA through Fashion for Paws, where he was a runway model, and other events so his fellow rescued dogs can have the same opportunity he had!

He brings joy to everyone he meets and I am lucky to have him in my life! Shout out to HRA and the staff and volunteers who saw something special in him and gave him a second chance!

Want your pet to be considered for the Arlington Pet of the Week? EmailÂ [emailÂ protected]Â with a 2-3 paragraph bio and at least 3-4Â horizontally-orientedÂ photos of your pet. Please donâ€™t send vertical photos, they donâ€™t fit in our photo galleries!

Each weekâ€™s winner receives a sample of dog or cat treats from our sponsor,Â Beckyâ€™s Pet Care, along with $100 in Beckyâ€™s Bucks. Beckyâ€™s Pet Care is the winner of six consecutive Angieâ€™s List Super Service Awards, the National Association of Professional Pet Sittersâ€™ 2013 Business of the Year and a proud supporter of theÂ Arlington County Pawsitively Prepared Campaign.

Beckyâ€™s Pet Care provides professional dog walking and pet sitting in Arlington and all of Northern Virginia, as well as PetPrep training courses for Pet Care, CPR and emergency preparedness.