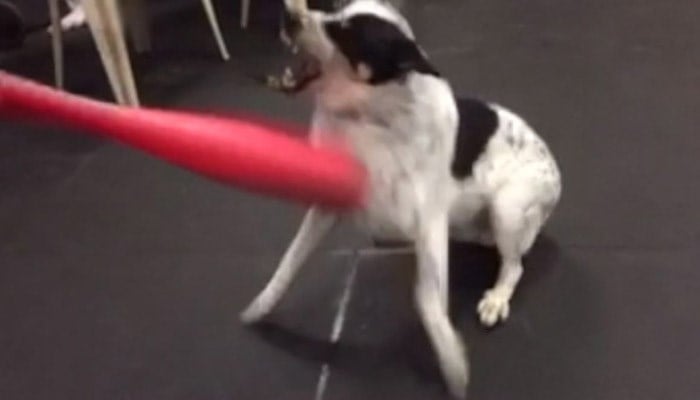 BOTHELL, WA (KPCQ/CNN) â€“ A 2-year-old video surfaced of a dog trainer in Washington state striking a dog with a small, plastic bat.

â€śIâ€™m going tell you, my reaction to that video was literally a gut knot and I honestly donâ€™t blame people for reacting to it,â€ť said Colleen McDaniel, who owns The Academy of Canine Behavior where the video was shot.

McDaniel said the video was shot two years ago and she only learned about it three weeks ago when animal control came to investigate an anonymous tip.

McDaniel said when she finally watched the video she immediately fired the dog trainer, who was a 15-year employee.

The video has been shared and viewed countless times on social media.

McDaniel wonâ€™t comment on if this was abuse to the dog because sheâ€™s only seen that clip.

â€śWhat you donâ€™t see on the video is that the dog was really mad because he couldnâ€™t do what he wanted to do and thatâ€™s why he was in here – he would bite you,â€ť McDaniel said.

Colleen says the dog in the video had aggression problems and, in the past, her staff would use the small plastic bats, with the top cut out to grab a dogâ€™s attention or interrupt a dog fight. Not by hitting the animals, but by hitting the bat against the wall making a loud noise.

She insists the bats were never meant to be used to strike the dogs and says her facility utilizes multiple training techniques.

Animal Control says their investigation concluded the behavior of the trainer towards the dog did not rise to the level of animal cruelty as defined by law.

Animal advocacy organizations are currently looking into ways that our animal cruelty laws can be strengthened in the Seattle area.

McDaniel said the facility does not hit animals as a part of training, but a rare case of that happening would be if a dog were to attack a trainer.

Other trainers disagree with that technique.

â€śI was horrified by the video IÂ have to admit,â€ť Karbo said. â€śI canâ€™t imagine anything that dog would have done that would have justified that behavior.â€ť

She encourages pet owners to do their research before signing them up for behavioral training.

â€śIf you take a human aggressive dog and humans then punish them, you make that dog 25 percent more likely to bite,â€ť Karbo said.

At the Academy of Canine Behavior, McDaniel said their training styles are constantly changing with the times. She insists her facility is a safe place for dogs to learn and grow.