An otter in Seattle has asthma, but her trainers were ready for this terrible air quality 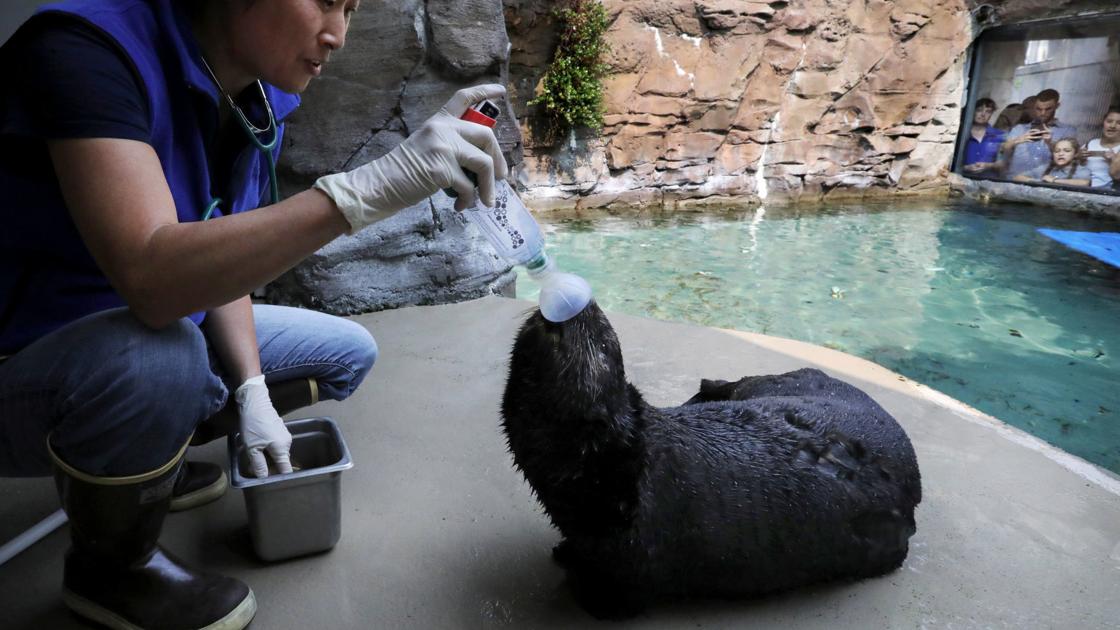 Puget Sound is barely visible through the glass windows of the Seattle Aquarium otter tank during afternoon feeding time ‚ÄĒ a thick layer of haze obscures the view.

Mishka, a 4-year-old sea otter, is prepared for times like these, when wildfire smoke chokes the region and air quality reaches unhealthy levels.

Three years ago, as smoke poured in from Eastern Washington, Mishka developed asthma, possibly the first otter to be diagnosed with the affliction. She struggled to breathe, was lethargic and wasn‚Äôt eating much.

That‚Äôs when aquarium staff jumped into action and developed an unprecedented way to help her, especially when haze grips our region and breathing can become tougher. The technique took extensive training and testing to master.

During feeding time, Mishka is taken aside and given an inhaler originally developed for cats; it looks a lot like an inhaler for humans, but with an elongated chamber and suction-cuplike applicator. The trainer feeds her seafood, then puts the apparatus up to her snout. Mishka takes a deep breath. A stethoscope is used to listen to her lungs. Then, repeat.

‚ÄúWhenever the air quality is bad, we keep a closer eye on all of our animals,‚ÄĚ said Caitlin Hadfield, senior veterinarian at the aquarium. ‚ÄúBecause she has this history, she in particular is one that we monitor.‚ÄĚ

She‚Äôs given medication multiple times per week, but the exercise is performed daily to train the otter to use the inhaler properly.

‚ÄúWhen she actually does the inhaler, that animal breathes in that medication. That doesn‚Äôt just happen,‚ÄĚ said Tim Kuniholm, the aquarium‚Äôs director of public affairs. ‚ÄúThat‚Äôs amazing behavior that animal willingly accepted. We think it‚Äôs the only one in the world that‚Äôs been done.‚ÄĚ

If you‚Äôve ever tried to teach a dog to sit, or keep a cat from scratching the sofa, you know training takes persistence. But with her health at stake, time was of the essence for this asthmatic otter to learn the trick that could save her life.

Getting her to hold still, understand the inhaler wasn‚Äôt a toy and breathe deeply on command all took arduous hours of training, said Julie Carpenter, a trainer who works closely with Mishka. And yes, there were lots of treats in between.

After just one month, Mishka had it down.

Now, she‚Äôs doing just fine ‚ÄĒ even in the haze. And while she isn‚Äôt getting any different treatment because of the smoke, she‚Äôs ready if things get worse.

‚ÄúWe change it based on what she needs,‚ÄĚ Hadfield said of the otter‚Äôs treatment. ‚ÄúWhat we want to do is maintain the behavior, so we can give it several times a day, if we need to.‚ÄĚ

Mishka, which means ‚Äúlittle bear‚ÄĚ in Russian, was brought to the aquarium in January 2015 after being rescued from a fisherman‚Äôs net and rehabilitated in Alaska. She‚Äôs the youngest of four sea otters at the aquarium, and her trainers say she‚Äôs by far the most playful.

Because of her daily routine, aquarium staff are confident she can handle multiple emergency treatments. It‚Äôs out of the ordinary, but all mammals are capable of an asthmatic response, Hadfield said.

‚ÄúThe classic sign of asthma is a more rapid rate of breathing, chronically, especially at rest,‚ÄĚ Davis said. ‚ÄúThey cough, which is unusual. If it worsens, they‚Äôll actually have difficulty breathing.‚ÄĚ

Davis says she treats at least one cat per month with asthma, but with the worsened air quality, she‚Äôs taken many more calls from concerned pet owners.

The smoke is expected to blow away by the weekend, giving us all a breath of fresh air. For Mishka, she‚Äôll still be getting regular checkups, and enjoying her handsome reward of a Dungeness crab.

« Hilary Lister Things to do in Mumbai this weekend »
The selected Optin Cat form doesn't exist.