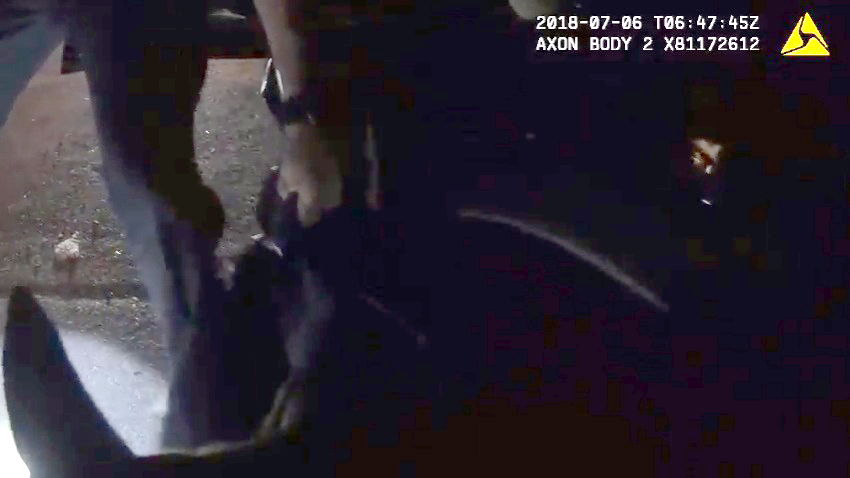 In the chaotic seconds after a St. Paul police dog broke free, it bit a bystander ‚ÄĒ leading the mayor and police chief to announce Monday that St. Paul‚Äôs K-9s will be used more sparingly¬†amid ‚Äúsignificant changes‚ÄĚ and an external audit.

Friday‚Äôs incident was the third high-profile St. Paul K-9 bite case in two years. In April, the police department changed its policy and¬†restricted when dogs can be used to physically apprehend a suspect, limiting it to the most serious cases.

‚ÄúLast week‚Äôs incident involving a St. Paul police canine is very disturbing, especially viewed in the context of other events that have occurred over the past two years,‚ÄĚ Mayor Melvin Carter said in a statement Monday.¬†‚ÄúI am working with Chief (Todd) Axtell to implement a set of temporary restrictions on deployment of police dogs, effective immediately, until a full audit can be completed.‚ÄĚ

The police department released body camera footage on Monday from K-9 Officer Mark Ross.¬†In the video, the officer can be heard saying ‚Äústay, stay‚ÄĚ and ‚Äúheel,‚ÄĚ but then he shouts, ‚Äúno!‚ÄĚ when the dog apparently breaks free. Ross repeatedly tells the dog, ‚Äúout!,‚ÄĚ a command to release.

A man can be heard moaning and Ross says, ‚ÄúStop pulling, sir. Sir, stop pulling.‚ÄĚ The video ends with a man‚Äôs voice saying, ‚ÄúOh my God.‚ÄĚ

Viewers may find the video disturbing.

About 1:40 a.m. Friday, police responded to a report of a male with a gun in the street in Dayton‚Äôs Bluff, according to a police report.

Officers found a 33-year-old man ‚ÄĒ Glenn L. Slaughter ‚ÄĒ in the 900 block of East Fourth Street who was not involved in the incident and was told to ‚Äúlay on the ground for his own safety while they searched,‚ÄĚ said Steve Linders, a police spokesman.

A short time later, Ross arrived with K-9 Suttree. When the dog was about 10 feet away from Slaughter, the dog‚Äôs collar broke and he ran toward Slaughter and bit him on the right forearm, Linders said.

Ross commanded the K-9 to stop, but the dog did not. The officer activated the dog‚Äôs electronic collar and pulled the dog off Slaughter‚Äôs arm.

When the dog was put back in the squad, Ross apologized to Slaughter and called for paramedics, Linders said. Paramedics evaluated Slaughter and determined he didn‚Äôt need to be taken to the hospital, but his family took him there, according to police.

WHAT ARE THE TIGHTER GUIDELINES?

The temporary restrictions mean St. Paul police dogs will not be used ‚Äúexcept in specific circumstances that pose a clear and immediate danger to officers or residents,‚ÄĚ according to a police department statement. The restrictions also ‚Äúincrease oversight for the unit, reduce the instances when canines can be deployed and refine the role of canine officers,‚ÄĚ the statement continued.

‚ÄúOur Canine Unit has served us well since it was established in 1958, but the mayor and I agree that we need to be sure we‚Äôre doing everything possible to deploy police dogs in the safest manner possible,‚ÄĚ¬†Axtell said.¬†‚ÄúOur goal is to determine what is working, what we can improve and how we minimize risk to the people we serve as well as officers.‚ÄĚ

K-9 officers are expected to have control over their dogs at all times and those who don‚Äôt will be removed from patrol, Linders said. They receive 16 hours a month of training and will now be tested every other week on their ability to meet control, recall and release standards.

The police department says K-9 officers will have to inspect all equipment before their shifts begin. The department is also requiring the dogs to work on shorter leashes.

Command-level approval will be required ‚Äúfor any canine deployment that does not involve instances where a suspect‚Äôs actions are likely to result in death or serious bodily harm ‚ÄĒ or canine apprehensions that do not involve people suspected of murder, manslaughter, aggravated robbery in the first degree, kidnapping, criminal sexual conduct or drive-by shootings,‚ÄĚ according to the police statement.

The city of St. Paul will pay for an outside expert to review ‚Äúevery aspect of the unit to ensure that officers and canines are working in the best interest of the city,‚ÄĚ according to the department‚Äôs statement. Axtell said he hopes the review will begin within the month.

OFFICER RE-ASSIGNED, K-9 TAKEN OUT OF THE UNIT

Friday‚Äôs case remains under investigation.¬†Suttree is no longer with the K-9 unit and Ross is being re-assigned, Linders said.

Ross, who has been a St. Paul police officer since 2001 and a member of the K-9 unit since 2016, has no history of disciplinary action. An internal-affairs investigation involving Ross was opened on Monday, according to the police department.

‚ÄúI can guarantee you that he was working in good faith and no one feels worse about the citizen being bit than him,‚ÄĚ Titus said. ‚ÄúThis was an equipment malfunction and for a highly trained K-9 officer like Mark Ross to be immediately removed (from the unit) was a knee-jerk reaction and irresponsible. ‚Ä¶¬†The K-9 unit is nationally recognized as one of the best and they save lives, they protect citizens and they protect cops. This was a very unfortunate situation.‚ÄĚ

In April 2017, the city approved a¬†record $2 million settlement to Frank Baker after he was mistaken for a suspect¬†who police were seeking in June 2016, and was bitten by a police dog and kicked by an officer. He was hospitalized for two weeks due to his injuries.

In September,¬†Desiree Collins was taking out her garbage in St. Paul when she was attacked by a police dog¬†looking for a male burglary suspect, according to a federal lawsuit that is ongoing.

Bob Bennett, an attorney who represented Baker and now Collins, said he thinks Monday‚Äôs response from the mayor and police chief is ‚Äúappropriate ‚Ä¶ given what we‚Äôve seen with problems in the unit. ‚Ä¶ It‚Äôs a lot better than sticking your head in the sand and ignoring it.‚ÄĚ

In Collins‚Äô case, the K-9 also didn‚Äôt heed officers‚Äô commands to ‚Äúrelease‚ÄĚ and the electronic collar didn‚Äôt stop the dog, who only stopped biting when the K-9 officer physically removed him from Collins, according to her lawsuit.