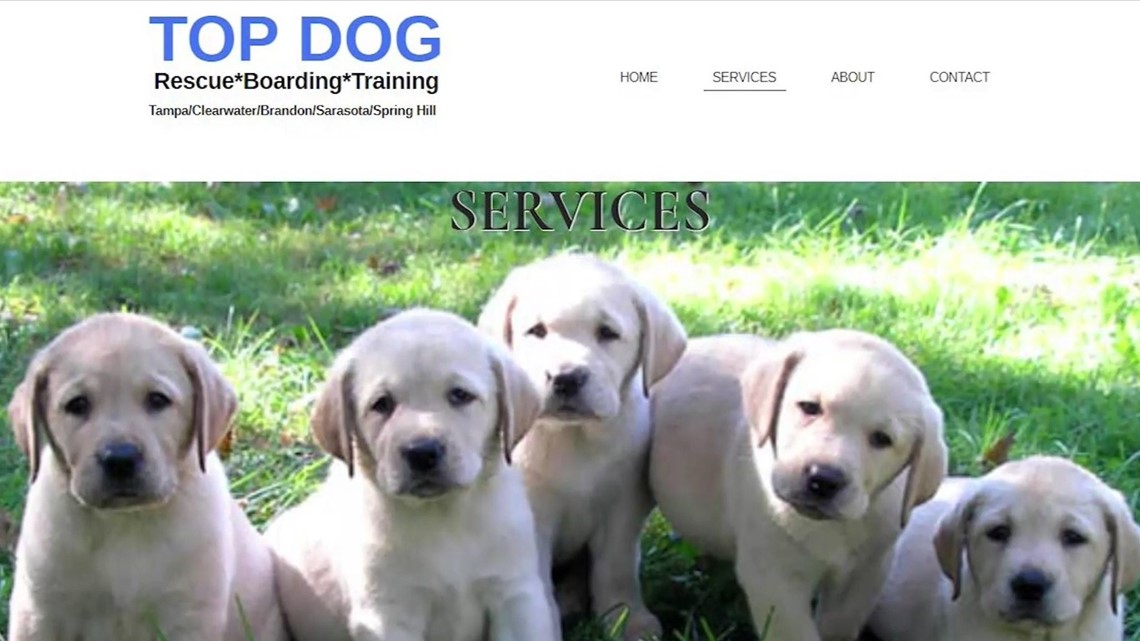 TAMPA, Fla. — A convicted felon accused of abusing animals opened a dog-training school just days after being released from prison.

Videos and photos of a man using the alias Ryan Smith appear on the Facebook page for “Top Dog Rescue, Boarding & Training,” a canine training school based in Hernando County that is described as a nonprofit organization.

10Investigates has learned the self-described dog trainer is actually Robert Ryan Friedler, a convicted felon who has been arrested more than a dozen times for crimes including child abuse, battery, and grand theft.

In 2016, our partners at News6 in Orlando were warned about Friedler’s previous business called Kids K-9 Rescue and Training, which promised to train service animals for children with special needs.

Several of Friedlerâ€™s former customers believe their dogs were abused in his care.

“My husband and I were just in tears when she was given back to us in her condition,” said Sherri Walton, who sent her family’s Doberman Pinscher to Friedler’s training program. â€śHer feet were so bloody and she had open sores on them. â€ś

According to Walton, the charity Runway to Hope paid Friedler nearly $3,000 to train their Doberman Pinscher to assist their then 9-year-old daughter with Down syndrome.

â€śShe was so underweight you could see all the bones, all her ribs, her hip bones, everything,â€ť Walton said, describing their dog’s malnourished appearance.

“He was skinny, he had the scratches all over him, he had patches of fur coming out,” Cronhardt told News 6.

Jessica Lumm said she gave Friedler a $2,500 down payment for a trained German shepherd to comfort her teenage son who suffers from severe anxiety.

“He was a mess,” said Lumm, who claims the dog was not properly trained and frequently whined.

“I just can’t believe what monster would do it.”

According to those past customers, Friedler did not use his real name, instead identifying himself as Ryan Thompson.

As customer complaints about the dog training business began to surface in February 2016, authorities arrested Friedler for violating his probation in an unrelated domestic abuse case.

According to prosecutors, Friedler sent Facebook messages to his ex-girlfriend just weeks after he was released from state custody, in violation of a court order.

Friedler had previously served two years in prison for battering the woman and abusing a child.

â€śI think heâ€™s a psychopath,â€ť said Angela Spaulding, the former girlfriend who claims she suffered facial fractures, broken ribs, and a collapsed lung at the hands of Friedler. â€śHe enjoys hurting other people and animals that canâ€™t fight back.â€ť

Spaulding claims she witnessed Friedler abuse and kill her puppy.

In February 2016, Walton filed a report with the Sanford Police Department alleging fraud and animal abuse.

Believing the crime had been committed outside their jurisdiction, records show Sanford Police forwarded Walton’s complaint to the Orlando Police Department.

Walton had given her dog to Friedler in Orlando while her daughter was being treated at Arnold Palmer Hospital for Children, according to the report.

However, when Orlando police began investigating the complaint in March, investigators concluded that no crime took place within that city, instead believing the alleged animal abuse occurred at Friedler’s home in Polk County.

In May, an investigator with the Polk County Sheriff’s Office began reviewing Walton’s complaint. By that time, Friedler was already incarcerated in Fort Myers for violating his probation in the domestic abuse case.

A Polk County sheriff’s investigator visited Friedler’s former apartment in Davenport but found a new tenant living there, according to a report.

“There is no evidence of animal cruelty at (Friedler’s former apartment) if, in fact, that is where Robert would train the animals,” the investigator wrote.

According to the report, authorities in Polk County were going to notify the Orlando Police Department that they could not prove fraud had occurred in their jurisdiction.

Records produced by the Orlando Police Department do not indicate whether their agency received that notification or if any follow-up investigation with Orlando was conducted.

On Sept. 23, the first of many photos were posted to the Facebook page for Top Dog Rescue, Boarding & Training.

Soon, an SUV was parked in front of a home in Spring Hill covered in decals that read “Caution K9 Unit,” “Service Dog on Board,” and “Top Dog Tampa.”

When a News 6 reporter visited the Hernando County home, Friedler declined to discuss his canine school or his website’s claim that he is a certified dog trainer.

“Have a good day,” said Friedler as he closed the door, refusing to answer questions about whether he had previously abused dogs.

Friedler did not respond to an email sent by News 6 requesting copies of Internal Revenue Service records that would verify his organization’s status as a nonprofit.

Hiring a good dog trainer is tough as they are not regulated in the state of Florida. Here are a few good resources when it comes to hiring a dog trainer:

The Association of Professional Dog Trainers

APDT: How to Choose a Dog Trainer

« Lucas County Dogs for Adoption: 8/1 Tips for finding the right trainer for you and your dog »
The selected Optin Cat form doesn't exist.