7 Subtle Signs Your Dog Is Stressed

Most people know a dog‚Äôs tail between its legs is likely body language for stress. But what about the more subtle ways a dog shows it‚Äôs uncomfortable? Here are seven signs your dog might be stressed ‚ÄĒ and what you can do about it.

A yawn after your canine friend has finally completed her 100th circle and settled down for a nap is one thing. But a yawn from a dog who doesn‚Äôt appear to be sleepy or bored could be a sign of stress. ‚ÄúA stressful yawn is more prolonged and intense than a sleepy yawn,‚ÄĚ veterinarian Lynn Buzhardt writes for Veterinary Centers of America. So if you catch your dog yawning at the vet or in other stress-inducing situations, she‚Äôs probably showing she‚Äôs more worried than tired.

Just like with yawning, don‚Äôt instantly sound the alarm bells any time your dog drools or licks. Some pups are more prone to letting their saliva fly, and that‚Äôs perfectly normal. But if you spot your dog excessively drooling or licking, it could mean he‚Äôs stressed, according to Veterinary Centers of America.

Use your environment and dog‚Äôs body language as clues. Are you in a new or uncomfortable situation, and is he exhibiting other signs of anxiety? Is he drooling or licking his lips without any food in sight? If so, it might be stress.

Most dogs chew ‚ÄĒ it‚Äôs just a fact of canine country. But there‚Äôs normal chewing (and that magical stage of puppy teething), and then there‚Äôs chewing out of stress. According to the ASPCA, some dogs experiencing stress might channel their frustration into chewing or biting nearby objects. For instance, a dog might chew on a gate if she wants to chase something on the other side. Plus, dogs with separation anxiety might chew and destroy household items when left alone.

It‚Äôs important to teach your dog appropriate chewing behavior and try to alleviate any stressors. The ASPCA suggests dog-proofing your house and offering your dog plenty of safe chew toys and bones. If you provide her with enough mental and physical stimulation, she shouldn‚Äôt feel such a need for extreme chewing. 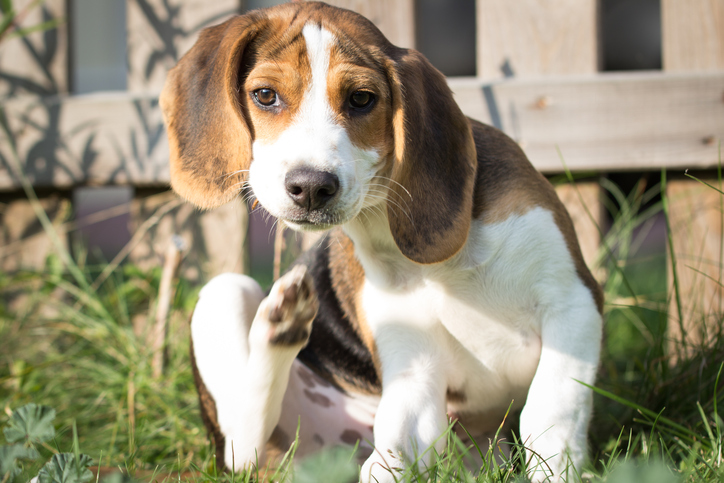 Although it can be pretty startling (especially in the middle of the night when you‚Äôre fast asleep), it‚Äôs usually no cause for concern when your dog creates a tiny earthquake as he‚Äôs violently scratching an itch. But if your dog is ‚Äúscratching himself when he‚Äôs not itchy,‚ÄĚ that could be a sign of stress, according to Best Friends Animal Society.

You obviously can‚Äôt ask your dog whether he was actually itchy, so you have to consider the situation and rule out any other reasons for scratching besides stress. According to Best Friends, itching can be a form of ‚Äúdisplacement behavior‚ÄĚ that occurs when a dog is nervous and doesn‚Äôt know how to respond in a situation. So if his scratching seems out of place, it‚Äôs probably due to nerves and not actual grooming needs.

Have you ever had company over only to realize your dog has excused himself to sit alone in a quiet room? He was probably taking matters into his own hands (err ‚Ä¶ paws) to manage his stress level. According to petMD, ‚ÄúA dog that is constantly isolating him or herself from other pets or people may be suffering from anxiety or a sickness.‚ÄĚ

If it‚Äôs just a one-time occurrence and he behaves normally afterward, then you know to avoid that particular stressor going forward. But if the isolation is frequent, make an appointment with your veterinarian to check for any underlying cause.

Avoidance is a less extreme version of isolation in a stressed dog. And sometimes it might be so subtle you‚Äôd never know your dog was nervous. ‚ÄúWhen faced with an unwelcome situation, dogs may ‚Äėescape‚Äô by focusing on something else. They may sniff the ground, lick their genitals, or simply turn away,‚ÄĚ according to Veterinary Centers of America.

Furthermore, Best Friends says a dog might simply look away from unwanted contact, or she might attempt ‚Äúlying down and trying to make whatever is happening stop by not taking part in it.‚ÄĚ So it might seem as though your dog is acting completely nonchalant when in reality she‚Äôs not comfortable at all. 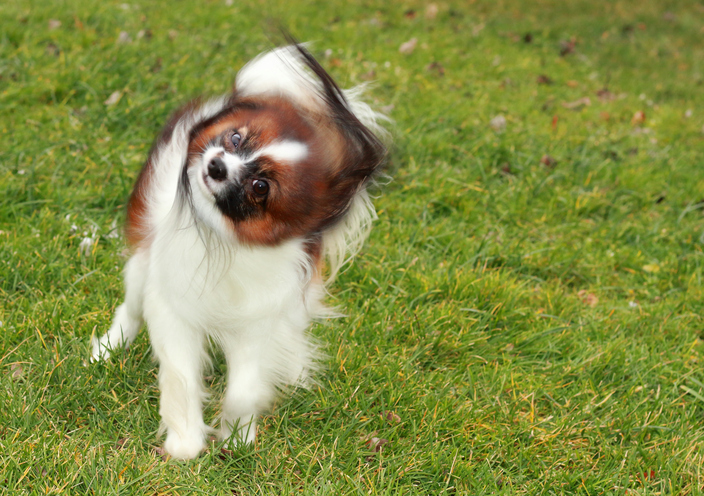 Actual shaking where your dog is visibly trembling is a pretty obvious indicator of nerves. But did you know a whole body shake ‚ÄĒ the kind that sprays water everywhere after a bath ‚ÄĒ could also be a sign of stress? Now, it‚Äôs perfectly normal when your dog shakes after his bath, even though it probably stresses you out as you run for cover. But if he shakes after being handled by a stranger (especially that pesky veterinarian) or engaging in strenuous play at the dog park, he might be trying to de-stress, according to Best Friends. The good news is unless the stressor persists, he‚Äôs usually able to shake it off and move on.

How to help a dog who‚Äôs stressed

It‚Äôs important to recognize these subtle signs of stress in your dog, so you know what‚Äôs bothering him before it compounds into something more serious. If you notice any signs of stress, you should try to pinpoint the cause. Allow your dog to regroup away from the stressor, and resist excessively comforting him, as that will just confirm his fears, according to Veterinary Centers of America.

Instead, try positive reinforcement and exposure therapy. ‚ÄúIf we slow down whatever situation caused the fear and start exposing the dog in small amounts at a distance, we can help him to completely overcome his fear,‚ÄĚ according to Best Friends. You also can try some natural relaxation techniques to relieve his tension. And, of course, if your dog is consistently exhibiting signs of stress, see your veterinarian.