My spouse sometimes jokes that the tiny dog breeds that have colloquially become known as ŌĆ£purse dogsŌĆØ arenŌĆÖt really dogs; to him, theyŌĆÖre cats, or hamsters, or some other small, domesticated pet. In actuality, all dogs are real dogs, of course ŌĆö but the fact of the matter is that when it comes to puppers, people have all sorts of different thoughts on what the perfect sized dog for them is. Some folks, for example, are into dogs that grow really big ŌĆö and when I say big, I mean big. Like, dogs you could put a saddle on and ride around your backyard on (provided the dog is cool with it, naturally). Does that sound like exactly the right sized dog for you? Then read on; these 14 breeds might be just what youŌĆÖre looking for in a pet.

Despite their size, large dogs are often also some of the gentlest of pups around. Indeed, many were bred to take care of livestock, so protectiveness and nurturing are innate qualities of a variety of large breeds. They also donŌĆÖt always need quite as much exercise as you might think ŌĆö although obviously theyŌĆÖll still need plenty of space. (If you live in a small studio apartment, a large breed might not be the best choice.) TheyŌĆÖre even terrific with kids.

However, big dogs as canine companions arenŌĆÖt without their drawbacks ŌĆö many of which are related to their health. Larger dogs typically have shorter expected life spans than smaller ones, averaging around seven to 10 years against smaller breedsŌĆÖ 12 to 15, according to pet site Fido Savvy. A serious condition called Gastric Dilation Volvulus (GDV) is also seem much more commonly in large dogs, particularly those with deep chests ŌĆö think Great Danes and Greyhounds, among others. GDV involves a dogŌĆÖs stomach suddenly filling with gas and twisting in such a way as to cut the passages off between the stomach and the esophagus and intestines. ItŌĆÖs life-threatening if it isnŌĆÖt treated immediately; indeed, itŌĆÖs frequently fatal.

But there are always risks with pet ownership, regardless as to the pet you choose ŌĆö so if youŌĆÖre up to the challenge of dealing with the specific set that comes along with having a big dog, you might consider adopting one of these breeds. You couldnŌĆÖt ask for a more loyal and loving fur-pal. 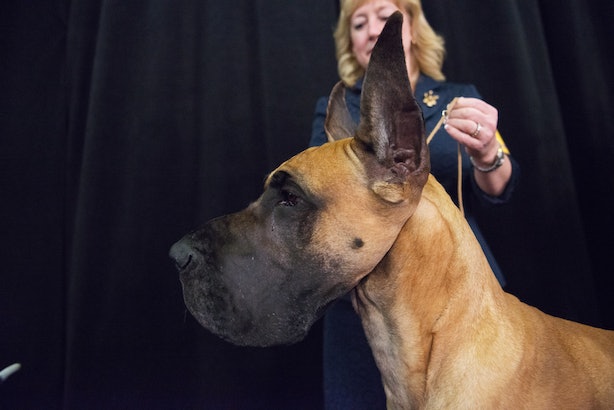 I mean, you canŌĆÖt have a list of gigantic dog breeds without including the mighty Great Dane, right? TheyŌĆÖre essentially the Platonic ideal of gigantic dog breeds. According to HillŌĆÖs Pet, male Great Danes are typically around 32 inches, while female Great Danes are around 30 inches; both male and female dogs of this breed average between 100 and 120 pounds. Personality-wise, theyŌĆÖre considered ŌĆ£gentle giantsŌĆØ; theyŌĆÖre also relatively easy to train, although it depends in some respects on the individual dog. (Some can be pretty stubborn.) 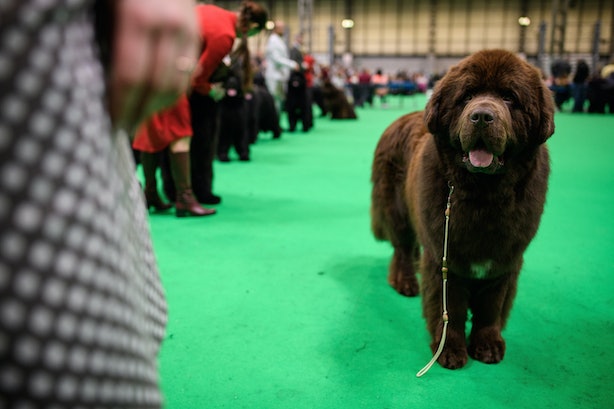 Newfoundlands are absolute sweethearts ŌĆö and theyŌĆÖre enormous. The American Kennel Club (AKC) pegs their average stats at around 28 inches and 130 to 150 pounds for male dogs and 26 inches and 100 to 120 pounds for female dogs. TheyŌĆÖre incredibly trusting, though, and they train well; theyŌĆÖre also great with kids. 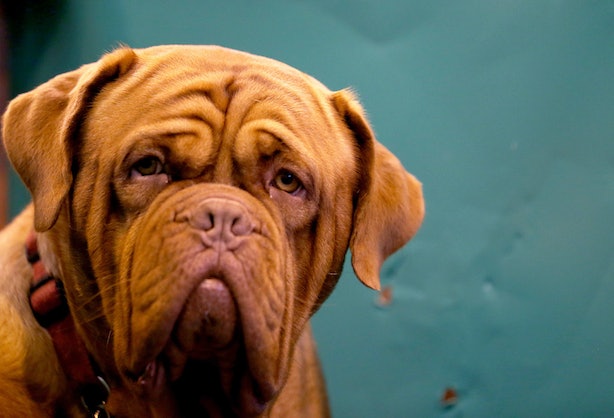 There are a lot of Mastiff breeds, and pretty much all of them grow to impressive sizes. Regular male Mastiffs average at least 30 inches, while for female dogs, itŌĆÖs at least 27.5 inches, according to the AKC; weight-wise, they can range between 120 pounds for small females and 230 pounds for large males. TheyŌĆÖre all largely loyal, dignified, and intelligent dogs, excellent at guarding their loved ones and keeping them safe.

Saint Bernards may only weigh around 25 pounds as puppies, but as adults, male dogs can grow to 30 inches and between 120 to 180 pounds, according to Vet Street. Female Saint Bernards are a bit smaller, but not by much: The AKC notes that theyŌĆÖre typically around 26 to 28 inches and between 120 and 140 pounds. Surprisingly, though, theyŌĆÖre good indoor dogs; theyŌĆÖre generally pretty quiet and eve-tempered, and although they appreciate outdoor space, they donŌĆÖt get destructive indoors the way high-energy breeds do.

P.S. If you get a Saint Bernard, please name it Beethoven.

According to Dogtime, the Otterhound is an English dog related to the Bloodhound. Both independent and affectionate, theyŌĆÖre good with other dogs and with kids ŌĆö perhaps surprisingly so, given that even small female Otterhounds can weigh around 65 pounds. The American Kennel ClubŌĆÖs statistics for Otterhounds place them at an average of 27 inches and 115 pounds for male dogs and 24 inches and 80 pounds for female dogs.

However, itŌĆÖs worth noting that Otterhounds are quite rare; Dogtime notes that there are currently fewer than 1,000 Otterhounds worldwide, with only 350 to 500 of them in the United States. 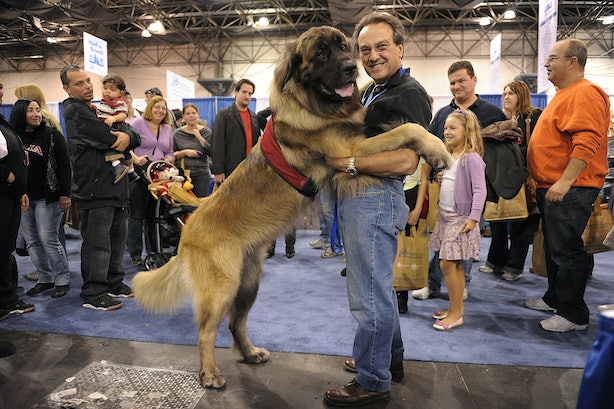 No wonder Leonbergers get so big ŌĆö the breed is a mix of Newfoundland, long-haired Saint Bernard, and Great Pyrenees, according to Dogtime. They typically grow to sizes ranging from 28 to 31.5 inches and 110 to 170 pounds for male dogs and 25.5 to 29.5 inches and 90 to 140 pounds for female dogs; theyŌĆÖre also pretty high energy, requiring a lot of exercise and attention. TheyŌĆÖre still gentle, though, and make fantastic family dogs.

If youŌĆÖre looking for a low-maintenance pup, an Alaskan Malamute is not the right dog for you. If you donŌĆÖt mind a pet that requires a lot of hands-on care, though ŌĆö and you donŌĆÖt live in too hot a climate ŌĆö this beautiful breed may be exactly what youŌĆÖre looking for. Dogster lists their stats as between 22 and 26 inches and 70 and 95 pounds; the American Kennel Club is a bit more specific, though, putting male dogs at around 22 inches and 85 pounds and female dogs at 23 inches and 75 pounds. They need a lot of activity ŌĆö but that also mean theyŌĆÖre quite playful. If youŌĆÖre outdoorsy, a Malamute might be the perfect companion for you. 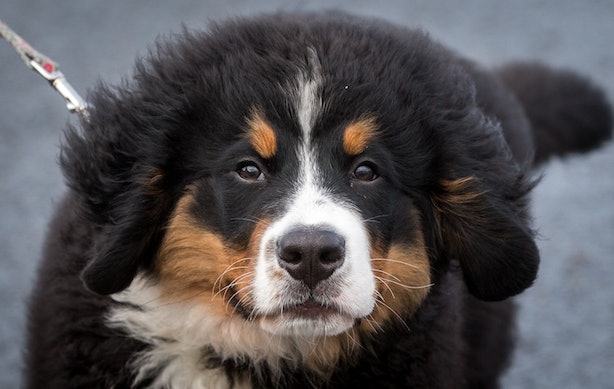 Per Petfinder, a typical adult male Bernese Mountain Dog is around 25 to 27.5 inches and 90 to 120 pounds, while a typical adult female of the breed measures in at 23 to 26 inches and 70 to 100 pounds. Even-tempered and obedient, they can also be ŌĆ£a little goofyŌĆØ when they play with their families, as Dogtime puts it. They appreciate outdoor spaces in which they can run around freely. 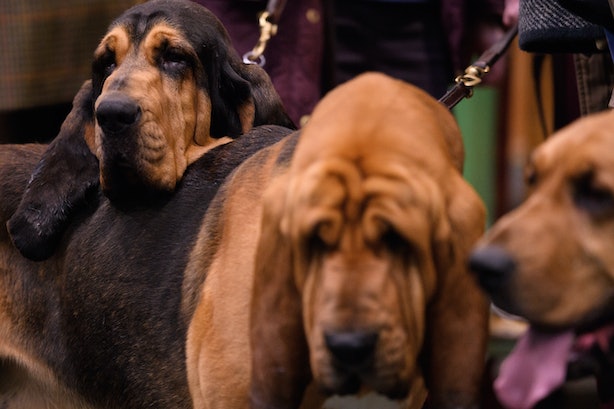 Despite their doggedness when it comes to tracking and trailing (thatŌĆÖs what they were bred for, after all), Bloodhounds are also docile and gentle pups ŌĆö although youŌĆÖll need to make sure they know youŌĆÖre in charge; otherwise, they can be a bit willful and stubborn. According to Dog Breed Info, male Bloodhounds usually grow to around 25 to 27 inches and 90 to 110 pounds, while female Bloodhounds average out at around 23 to 25 inches and 80 to 100 pounds. 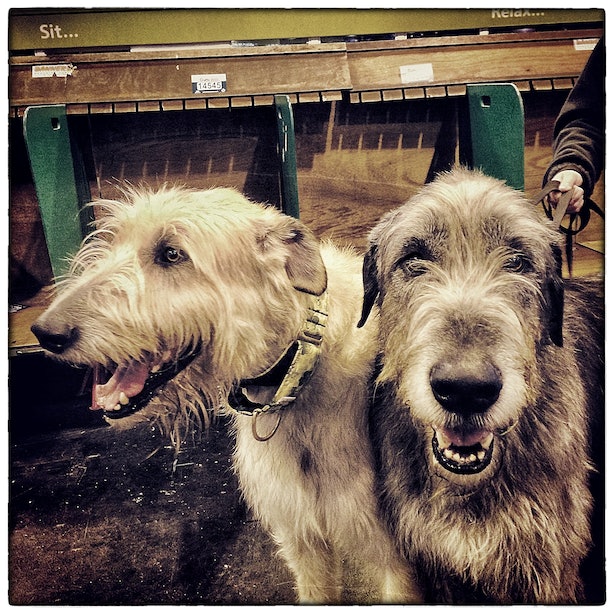 Irish Wolfhounds are built for galloping, so they definitely need a lot of outdoor space to be happy. Like many large breeds, however, theyŌĆÖre also ŌĆ£gentle, noble, sensitive, and easygoing,ŌĆØ per HillŌĆÖs Pet.

I actually only learned that Schnauzers come in giant sizes recently ŌĆö but if your only experience with Schnauzers are miniature or standard sized ones, donŌĆÖt assume you already know everything there is to know about Giant Schnauzers by extension. As the AKC notes, the three sizes of Schnauzers are actually three different breeds.

Giant Schnauzers were bred in Germany as working farm dogs, so their size makes sense: Male dogs grow on average to around 25.5 to 27.5 inches and 65 to 95 pounds, while female dogs measure up at 23.5 to 25.5 inches and 65 to 95 pounds, according to Pet Finder. TheyŌĆÖre a little rambunctious for small kids, but theyŌĆÖre also fiercely loyal and protective, making them great family dogs. Make sure youŌĆÖve got a lot of outdoor space if youŌĆÖre planning on getting a Giant Schnauzer ŌĆö they need to run around and exercise a lot.

Anatolian Shepherd Dogs definitely live up to their names: They tend to ŌĆ£adoptŌĆØ their human families the same way they would a herd of sheep or cattle. They can be fierce around strangers, but itŌĆÖs all to protect their ŌĆ£flockŌĆØ; theyŌĆÖre caring and gentle with their humans. TheyŌĆÖre also, predictably, enormous ŌĆö according to Petful, male dogs are usually around 29 inches and 110 to 150 pounds, with female dogs coming in at 27 inches and 80 to 120 pounds.

Kuvaszes arenŌĆÖt easy to train ŌĆö theyŌĆÖre quite independent ŌĆö but theyŌĆÖre also sweethearts with their humans. Just know that they can be a lot to wrestle with; male dogs are usually around 28 to 30 inches and 100 to 115 pounds. Female dogs arenŌĆÖt much smaller, typically coming in at 26 to 28 inches and 70 to 90 pounds.